Joe Biden promises stimulus will bring US economy ‘roaring back’ 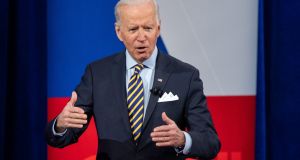 Joe Biden said the US economy would come “roaring back” if Congress approved his $1.9 trillion fiscal stimulus plan, as he pledged to deliver widespread coronavirus vaccinations and a stronger recovery in the second half of the year.

Speaking in Milwaukee, Wisconsin on Tuesday, the president said that Covid-19 vaccines would be accessible to all Americans who wanted one by the end of July, with 600 million doses delivered by then.

Along with the prospect of an improvement in the public health response, Mr Biden said the world’s largest economy would need a jolt from government spending to accelerate its rebound. The president’s priority is to secure approval from lawmakers for his stimulus plan but he faces opposition from Republicans on Capitol Hill who believe the price tag is excessive.

“[The] overwhelming consensus [is] to grow the economy . . . we can’t spend too much. Now’s the time we should be spending,” Mr Biden said. “Depending on who you talk to, between six months and a year and a half, we can come back. We can come roaring back.”

At the event that marked his first official trip outside Washington since his inauguration last month, Mr Biden said he wanted to avoid speaking about his predecessor, Donald Trump. On Saturday, Mr Trump was acquitted in a Senate impeachment trial of inciting a riot at the US Capitol.

“For four years, all that’s been in the news has been ‘Trump’. The next four years, I want to make sure all the news is the American people,” Mr Biden said, declining to comment on whether he would support a criminal investigation into Trump’s role in the riot.

“I will not tell my justice department . . . who they should and should not prosecute.”

In pitching his stimulus plan, Mr Biden cited polls that suggested it was widely popular among the public, in an effort to put pressure on lawmakers to back the bill.

“The nation is not divided. You go out there and take a look, you talk to people. You have fringes at both ends but it’s not nearly as divided as we make it out to be,” Mr Biden said. “And we have to bring it together.”

The president faced a challenge to his economic plan in Milwaukee from a Trump voter and co-owner of a woodworking company, who worried that the administration’s push to increase the federal minimum wage from $7.25 to $15 an hour would damage small businesses.

Many Republicans and some moderate Democrats are opposed to the wage rise and have urged the White House to drop it from the legislation or reduce the degree of the increase. Mr Biden said he would allow time for businesses to adapt.

“It’s about doing it gradually,” Mr Biden said. “No one should work 40 hours a week and live in poverty.”

The president also rejected a call from an audience member to forgive up to $50,000 in student loans per person, which has been championed by progressive lawmakers. His response triggered a backlash from fellow Democrats including New York congresswoman Alexandria Ocasio-Cortez, who criticised Mr Biden’s stance on Twitter.

The president was also on the defensive over his approach to reopening schools. Mr Biden was forced to clarify that his goal was to have a “significant percentage” of children from kindergarten to eighth grade in school five days a week – rather than just one – by the end of his first 100 days in office.

After pledging that all Americans would have access to vaccinations by the end of July, the president was guardedly optimistic that the country could return to pre-pandemic levels in a year.

“I think that there’ll be significantly fewer people having to be socially distanced, have to wear a mask,” Mr Biden said. “I don’t want to over-promise anything here. I told you when I ran and when I got elected, I will always level with you.”

Foreign policy barely featured during the town hall, but Mr Biden did take a swipe at China over its human rights record.

“China is trying very hard to become the world leader, and to get that moniker and be able to do that they have to gain the confidence of other countries,” he said. “And as long as they’re engaged in activity that is contrary to basic human rights, it’s going to be hard for them to do that.” – Copyright The Financial Times Limited 2021