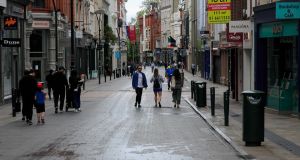 Grafton Street: In the most benign scenario, household spending will drop by close to 12 per cent this year, ESRI predicts. Photograph: Gareth Chaney/Collins

The decline in consumer spending caused by the coronavirus crisis could reduce indirect tax revenue in 2020 by more than a fifth, according to a new study by the Economic and Social Research Institute (ESRI)

In the most benign scenario, where normal economic activity can resume in the final quarter of the year, household spending would still fall by almost 12 per cent this year, the ESRI research estimates.

This would result in a proportionately steeper fall in indirect tax revenues of 18.7 per cent, because purchases that are most affected by the suspension of normal economic activity such as motor fuel are taxed at higher rates than more stable items such as groceries.

The study by Cathal Coffey, Karina Doorley, Conor O’Toole and Barra Roantree found that in the most severe of the scenarios modelled, where a second wave of infections prompts the reintroduction of a second lockdown for 12 weeks from October, household spending for 2020 would plummet 20 per cent.

This would reduce indirect tax revenues by almost a third, or 31.7 per cent, wiping up to €6.7 billion from exchequer revenues.

The ESRI’s research draws on real-time spending data in Ireland and international evidence to simulate the effects of the Covid-19 pandemic on consumption in Ireland in 2020 and indirect tax revenues.

“The findings of this study point to major reductions in household expenditure this year given the necessary restrictions to suppress the spread of Covid-19,” said Mr O’Toole.

1 Varadkar to meet banks in row over interest on mortgage payment breaks
2 If international visitors are pariahs why are we not testing them on arrival here?
3 Can Grafton Street stop the flood of closures?
4 Belgium helps Ireland to a Brexit boon
5 ‘My rent here is so low it’s a joke’
6 WeWork on track for profits and positive cash flow in 2021, says chairman
7 What is Covid Tracker Ireland?
8 Examinership of Apple reseller Compu b confirmed
9 I tried out deep fake app Doublicat. The results were terrifying
10 AIB to compensate another 1,100 tracker mortgage holders
Real news has value SUBSCRIBE