EU fiscal rules will be relaxed for Ireland to deal with Brexit-like shocks, says commissioner 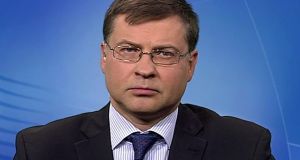 EU fiscal rules will allow Ireland to increase its investment programmes in the face of asymmetric shocks like Brexit, the European Commission’s senior economic vice-president,Valdis Dombrovskis, will tell Ministers on a visit to Dublin over the next two days.

The commission acknowledges that Ireland will be the member state most dramatically affected by Brexit, he told The Irish Times, and preparation is “essential”. But “there are current fiscal rules, for example the so-called “investment clause”, which allows member states temporarily to deviate from the adjustment paths of their medium-term budgetary objectives to increase EU co-financed investment. So Ireland, for example, can make use of this clause”.

Mr Dombrovskis, a former Latvian prime minister and one-time MEP, is commission vice-president for the euro and social dialogue. He is visiting Dublin on Wednesday to meet Ministers including Minister for Finance Paschal Donohoe, to discuss Ireland’s “European Semester”, the EU economic policy monitoring and co-ordination process for member states.

Among other issues up for discussion is the gulf between the commission and Ireland over digital taxation, and measures to complete European Monetary Union, specifically the Banking Union.

Mr Dombrovskis emphasises above all the need for Ireland to continue on a path of Government debt reduction. As a share of GDP Irish Government debt will decline from 69 per cent last year to 67.2 per cent next year, he said, but this remains above the Maastricht ceiling of 60 per cent.

Compared to the European average, he said, Ireland is doing somewhat better than most member states in implementing the semester country-specific recommendations, and “according to the autumn economic forecasts we expect Ireland to meet its medium term budgetary objective of a structural deficit of 0.5 per cent of GDP this year. It is important it stays on track.”

Mr Dombrovskis stresses the need to invest “in energy, in transport, in water supplies . . . and in improving supply in the housing market because one of the tendencies which we see is a rapid increase in prices, a 9.2 per cent increase last year”.

In response to whether such recommendations not incompatible with fiscal restraint, he said: “This is a question we often get and from many countries. The key is prioritisation of, the composition of, the public finances – in a sense there will always be a trade-off or balance to be found between fiscal sustainability needs at a time when we are calling for an accelerated reduction of public debt.

“That, at the same time as there is also a need for investment, so some balance will need to be found. It can not only be at the expense of the deficit, but also as a matter of prioritisation within the budget.”

He argues that “fiscal space” for the Minister for Finance can also be found if Ireland this year meets its medium-term budgetary objectives and simply maintains its position. “There is certain scope for manoeuvre,” he said.

On digital taxation, the commissioner acknowledged the gap between the commission and Ireland. He emphasises that the commission is working to ensure digital companies pay their fair share of tax in the context of the framework being established by the OECD for tackling base erosion and profit shifting. But if that was taking too long the commission would want to press ahead within the union. Unanimity on tax issues meant that would have to be with the support of all member states.

Mr Dombrovsk is also speaking today at the European Financial Forum 2018 Conference in Dublin and will on Thursday also address a Dáil committee.

1 Berkshire Hathaway profits surge despite $10bn writedown
2 Facebook content moderator lodges High Court action
3 Financial ombudsman warns consumers of attempted scam
4 MSD buys Takeda biologics plant in Dunboyne
5 Chris Johns: Digital equality must be moved up the priority list
6 Wirecard was looted before collapse, German prosecutors suspect
7 ‘Saudi Arabia is where the opportunities will happen in future’
8 DCU in AirSpeed Telecom WiMax trial
9 Ten of the most mysterious aircraft disappearances
10 So you want to invest in the stock market: what will it cost?
Real news has value SUBSCRIBE