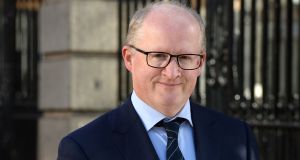 Central Bank governor Philip Lane: to be nominated as a candidate for the job of ECB vice-president.

Central Bank governor Philip Lane is to be nominated as a candidate for the job of European Central Bank vice-president. Minister for Finance Paschal Donohoe, who will make the nomination, informed the Cabinet on Tuesday morning of his intention to nominate Mr Lane, according to Government sources. Mr Lane will contest the job with the man seen as front-runner, the Spanish economic minister, Luis de Guindos.

The vice-president’s job is currently held by Vitor Constancio, who is to retire in May. Nominations for the job recently opened. Euro-zone finance ministers will vote on the appointment on February 19th before a European Parliament hearing and a formal appointment by European Union leaders. The appointment schedule will be agreed on March 22nd at the European Council and the new vice-president will take up their post on June 1st.

Mr de Guindos has been seen as favourite, but there is reportedly some concern in the ECB about appointing a politician to the role. Prof Lane, one of Ireland’s leading economists, is likely to be seen as a strong candidate. It is not clear yet whether there will be any other candidates in the field.

Prof Lane was appointed as Central Bank governor in November 2015. This means he is already a member of the ECB governing council as a national governor. He is also an ex-officio member of the steering committee and general board of the European Systemic Risk Board, having recently chaired a task force on safe assets.

The vice-president role is an executive position which would see Prof Lane move to Frankfurt and thus create a vacancy in his current job.

The vice-presidency is one of a number of ECB executive board positions to fall vacant over the next 18 months. There had been uncertainty about whether Mr Donohoe would decide to nominate an Irish candidate for this position.

“I said that when and if Ireland puts forward a candidate to the ECB’s executive board, they will be an exceptionally well qualified person. There can be no doubt that governor Lane is such a person of calibre and recognised standing,” Mr Donohoe said in a statement.

“Prof Lane’s outstanding economic, financial and policy-making record ideally position him to take a seat at the executive board of the European Central Bank,” the statement added.