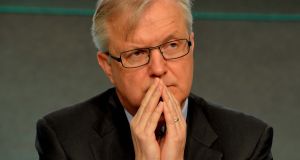 Olli Rehn said the current formulation for the ECB’s inflation target was skewed in favour of lower inflation rates.

The European Central Bank should adopt a simple inflation target of 2 per cent and scrap its current “below, but close to, 2 per cent” formulation which can confuse consumers and policymakers alike, two ECB rate-setters said on Friday.

The ECB has lagged its goal for price growth for years despite an aggressive stimulus policy of sub-zero rates and massive bond purchases.

It has now embarked on a year-long review that will see it redefine that aim, how to achieve it and communicate it.

Speaking the day after the official launch of the review, Dutch governor Klaas Knot and his Finnish counterpart Olli Rehn both signalled their preference for a 2 per cent target.

“It is not an easily communicable concept that we currently have a ‘close’ and a ‘below’,” Knot said during a panel discussion at the World Economic Forum.

“The outcome should be that we have an inflation objective that everyone on the governing council explains in identical terms.”

Knot, one of the most outspoken policy hawks at the ECB, has proposed adopting a 2 per cent target with a tolerance band around it – a move that would lower the pressure on the ECB to ease policy further.

In Helsinki, Olli Rehn said the current formulation was skewed in favour of lower inflation rates while the ECB’s target should be symmetric, meaning any undershoot should be taken just as seriously as an overshoot.

“This double-barrelled definition deviates downwards, meaning it is tighter, from the other central banks’ goals, which are usually symmetric and at around 2 per cent,” Rehn said. Euro-zone price growth rebounded at the end of 2019, with headline inflation ticking up to 1.3 per cent in December from a three-year low of 0.7 per cent two months earlier.

But both Knot and ECB president Christine Lagarde dismissed the recent increase in core and headline inflation as too small to matter.

“We’re seeing inflation moving a teeny, tiny little bit but this is really minor,” Lagarde said at the World Economic Forum. “It would take much higher numbers to actually change the picture fundamentally.”

She warned, however, that financial markets should not simply assume that the ECB’s policy was on hold until the end of the review.

Flutter’s planned merger with Stars gets informal approval in Australia 07:27
Finance Ireland’s IPO, Huawei and Irish 5G, and pay rises at Bank of Ireland 06:30
How can I view my dead brother’s will if I’m not the executor? 05:50
Stocktake: Would markets punish a Sinn Féin-led government? 05:40
Big tech gains aren’t ‘extraordinary’ after all 05:40