Davos 2020: Rise of populism and future of capitalism also high on worry list 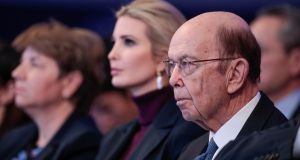 Trade tensions, climate change, rising populism and questions about the future of capitalism are all weighing on the outlook for global business, according to executives who gathered at the Swiss resort of Davos this week.

Global chief executives have swung from record optimism two years ago to record pessimism now, according to a survey from PwC released at the start of the week which set the mood for the annual event.

The sense of caution was reinforced by a report published by the World Economic Forum on the eve of its annual meeting, in which different visions of environmental disaster occupied all five slots at the top of the list of risks WEF members see for the year ahead.

“There’s only one Davos I remember when people felt optimistic, and it isn’t this one,” Dan Glaser, chief executive of Marsh & McLennan, told peers and clients at a Davos dinner.

Growing attention to the costs of global warming and the rise of populism have created “cognitive dissonance” for the executives in Davos who have enjoyed years of rising profits and share prices, one senior private equity chief executive observed.

The rise of anti-capitalist sentiment, and what Davos attendees should do about it, was high on senior executives’ list of preoccupations; many argued that they could and should reform the system so that it appeals to a wider set of stakeholders than the financial investors they have long prioritised.

Paul Tudor Jones, a hedge fund investor whose Just Capital group has worked for years to encourage models of business that are more friendly to employees, customers and the planet, said. “We’ve been a lone voice in the wilderness and then in a rush it changed.”

When 40 senior executives at a private Davos dinner were asked whether any of them still supported Milton Friedman’s 1970 theory that a company’s only responsibility was to its shareholders, not a single hand went up.

Action is needed if employees, customers and others are not to become jaded about companies’ sustainability pledges, executives agreed.

“We need to go from vision to execution to tangible action and we need to do it fast,” said Julie Sweet, chief executive of Accenture.

“You’ve got to bring a sense of urgency” to turning sustainability pledges into action, said Natarajan Chandrasekaran, chairman of India’s Tata Sons.

However some executives question whether this will happen. Chief executives’ attitudes have evolved, said Maurice Lévy of Publicis, but he voiced “reservations” about how much concrete change would follow.

Meanwhile, lingering questions about the outlook for the global economy remain unresolved.

The overwhelming majority of investors and executives still think 2020 will be a year of growth, but that is partly because they expect central banks to keep interest rates low.

“A flip of petrol on the fire [from central banks] can get things going,” said Anne Richards, chief executive of Fidelity International. “Nobody should bet against central banks.”

This has pushed asset prices to levels that are not easily reconciled with core fundamentals, many financial executives admit, and there was a widespread acknowledgment in Davos that a reckoning will be due in the coming years.

“The world is awash with liquidity,” the leader of one large asset manager said.

US president Donald Trump emphasised in a speech in Davos on Tuesday that investors are looking to the US economy to drive otherwise-modest global growth.

“The real question for the world now is what is happening to the American consumer and the consumer seems fine,” said Brian Moynihan, Bank of America chief executive.

Corporate leaders said they now felt better placed to adapt to trade tensions than they did last year, when many were hurriedly redrawing supply chains to adapt to Mr Trump’s escalating tariffs on Chinese imports.

“There was uncertainty among companies which were trying to figure out the trade war but you have seen a lot of that risk be liquidated recently” by the phase one trade deal between Washington and Beijing, Mr Moynihan said.

Some chief executives even said there had been a silver lining to the trade wars. “We have been forced to re-evaluate everything; we are much more efficient and flexible than before,” a US retail executive said.

But the truce had not resolved business’s longer-term concerns about a US-China “decoupling”, said Sir Martin Sorrell, the former WPP chief executive who now runs S4 Capital. “There’s a very great sense of optimism about phase one but there is some worry about whether phase two will ever get signed,” he said.

As they toured each other’s champagne receptions, executives spoke of a sense that the party must end, but few were predicting a global downturn any time soon.

“A crunch is probably a year or two away,” one leading hedge fund investor observed, quipping that “if the music is still playing, we need to dance”. – Copyright The Financial Times Limited 2020