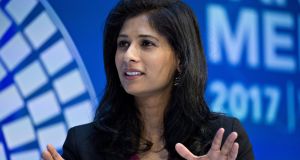 Economic growth in the Republic of Ireland is expected to decline this year and next, according to a new forecast from the International Monetary Fund (IMF).

The IMF also forecasts that economic growth will decline even further next year to 3.4 per cent.

The predictions are contained in the organisation’s latest world economic outlook, which present a noticeably downbeat assessment.

“Amid waning global growth momentum and limited policy space to combat downturns, avoiding policy missteps that could harm economic activity needs to be the main priority,” the IMF said in its report.

Global growth is now projected to slow from 3.6 per cent in 2018 to 3.3 per cent this year, its weakest growth rate in a decade and the IMF’s third downgrade in six months.

“The possibility of further downward revisions is high, and the balance of risks remains skewed to the downside,” it said.

The IMF said that after strong growth in 2017 and early 2018, activity slowed notably in the second half of last year due to a number of factors, most notably a sharp rise in trade tensions. The organisation said that while conditions have eased this year on increased optimism over a new US-China trade deal, the outlook remains weak.

The IMF’s latest forecast envisages that global growth will level off in the first half of this and firm up after that, returning to a projected growth rate of 3.6 per cent in 2020.

It highlights a number of developments that have boosted optimism in recent months , including the decision of the Federal Reserve to put interest rates on hold and improved data from key markets such as China and the US.

The IMF reduced its outlook for the euro zone to 1.3 per cent this year, down 0.3 points compared to three months ago.

Growth is predicted to be weaker in a number of key European economies, including Germany, Italy and France.

IMF also reduced its outlook for UK growth to 1.2 per cent this year, down 0.3 per cent from three months ago.