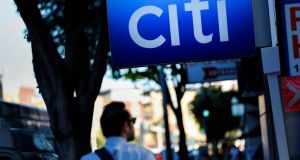 Citigroup bank established its European retail and commercial banking headquarters in Dublin last year as it merged its Irish and London-based entities in this State.

Citigroup’s top European executive said that Dublin is among a number of EU cities being considered as the US banking giant seeks to establish a broker-dealer subsidiary outside of the UK after Brexit.

The New York bank established its European retail and commercial banking headquarters in Dublin last year as it merged its Irish and London-based entities in this State.

“Our issue is with our broker-dealer [business] which is in the UK and which will lose passporting rights” after the UK exits the European Union, James Cowles, chief executive of Citigroup’s Europe, Middle East and Africa operations, adding that the group has “reached out” to regulators and governments across Europe, including Ireland, Germany, Italy, France, Spain and the Netherlands.

Citigroup will make a final decision on the matter in the first half of this year, Mr Cowles said, adding that it is working off 25 different criteria, from its experience with local regulators to quality of life, as it weighs its options.

He noted that Citigroup currently has 2,500 people in Dublin, having been in the country for five decades.

“It’s been a great experience and when we take a look at different aspects of our business currently in Dublin, there will be some things that we’ll move” to Ireland, he said. “We’ll have good, steady growth of employment in Ireland” and elsewhere in the EU, he said.

He said that banks looking at moving operations from the City of London will not concentrate these in one city.