Credit Suisse declines to say if Dublin is post-Brexit destination 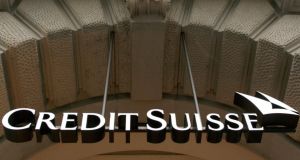 Credit Suisse is looking at various European cities to move some UK-based financial services to in the wake of Brexit.

Credit Suisse has declined to say if Dublin would be a beneficiary of any post-Brexit move, a senior board member of the Swiss bank said at a conference in Dublin on Tuesday.

The bank, which established a hub in Ireland last year for serving hedge funds, is currently looking at various European cities to move some UK-based financial services to in the wake of Brexit, according to the board member.

“We are in the early stage of looking at alternatives outside of the UK,” Noreen Doyle, the Irish-American vice-chair of the board of directors of Credit Suisse told the European Financial Forum, attended by hundreds of international bankers and money managers.

She declined to say if Dublin would emerge as a beneficiary as Credit Suisse moved some functions from the City of London. Credit Suisse chief executive Tidjane Thiam said in September that as much as a fifth of the volume of the group’s London operations could be affected by the UK’s loss of EU passporting rights for financial services as a result of Brexit.

Credit Suisse secured Central Bank approval in 2015 to set up a prime brokerage centre in the International Financial Services Centre, to employ 100 people, including traders. It took two years from the time the decision was made in Switzerland to the business receiving the regulatory nod, as it involved the first-time establishment of a non-EU bank setting up a branch, rather than full subsidiary, in Ireland. The trading floor was officially opened last January.