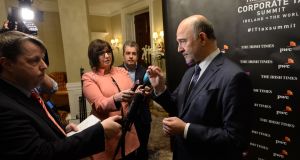 The European Commissioner for economic and financial affairs, taxation and customs, Pierre Moscovici, has rejected the Irish Government’s claim that plans to consolidate taxation across the EU would diminish our corporate tax base.

Speaking on the fringe of The Irish Times’ Corporate Tax Summit in Dublin on Tuesday, Mr Moscovici said the proposed Consolidated Common Corporate Tax Base (CCCTB) would benefit Ireland.

“No, I think it does not reduce tax revenues here in Ireland,” he said. “The impact assessment showed a very slight impact [on corporate tax revenues] but did not take into account the positive effect for our common growth. This proposal is good for Ireland.”

Earlier, the Minister for Finance, Michael Noonan, said the CCCTB proposals would narrow Ireland’s corporate tax revenues and reduce his flexibility in framing the annual budget.

Mr Noonan also noted that six parliaments in EU member states, including in Ireland, had rejected the CCCTB proposals and suggested that it would be difficult to get unanimity on the issue, which is required under EU rules.

In response, Mr Moscovici said: “This proposal is not take it or leave it. It’s a proposal open to compromise. What I only want is that it can be discussed in good faith and goodwill. The only thing I expect is an in-depth discussion and a good faith discussion.”

Mr Moscovici said he respected that the proposal requires unanimity. “If we don’t get it we don’t have agreement,” he said. “But everybody should stay cool and enter into the discussion. The commission is there to propose but it is up to the member states to decide.”

He said the commission was “ready for a compromise”.

On Brexit, and whether or not it might be possible for the UK to retain membership of some elements of the EU’s customs union, as suggested last week by Prime Minister Theresa May, Mr Moscovici said: “We have not yet started the negotiation. So I’m not going to speculate on any outcome. The only thing I can say is that [the UK] chose not to be in the internal market, we will have to find some new kind of arrangements.

“We will take into account the very specific arrangements between the UK and Ireland and the particular situation of Northern Ireland. ”