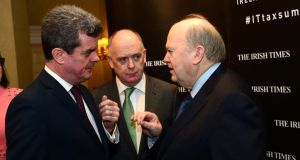 The European Commission’s ruling on Apple’s tax arrangements in Ireland is tantamount to a “land grab”, PwC managing partner Feargal O’Rourke has claimed.

He said Brussels had overstepped its remit in demanding €13 billion in back tax from the multinational.

Speaking at The Irish Times corporation tax summit in Dublin, Mr O’Rourke said he believed the Government was right to challenge the ruling and that nobody familiar with the particulars of the case believed the money belonged to Ireland.

While acknowledging the argument that Apple should have been paying more tax, he said the commission’s actions to retrieve the money were ill-judged.

“Doing it by ignoring the law is not the way to do it,” he said.

Provided the ruling was not politicised, Mr O’Rourke said he was confident the commission’s decision would be overturned by the European Court of Justice.

Apart from a low tax rate, Ireland’s stable tax environment was crucial to companies investing here and the commission’s move against Apple posed a threat to this stability, he said.

Mr O’Rourke said there was considerable international focus on Ireland’s handling of the Apple case and the outcome would have ramifications for future investment.

It claimed the Revenue Commissioners’ rulings allowed the US tech giant structure its business here in a way that resulted in “an effective corporate tax rate that declined from 1 per cent in 2003 to 0.005 per cent in 2014”.

In terms of the wider clampdown on multinational tax under the OECD’s Beps (base erosion and profit-shifting) process, he said Ireland had played what many felt was a “losing hand” particularly well.

This point was taken up by his PwC colleague Joe Tynan, who noted that despite the bleak forecasts about the impact of Beps here Ireland’s foreign direct investment had remained strong.

Whatever the outcome of Brexit or US tax reform, Mr Tynan said, Ireland would remain an attractive location for business because of its strategic location within the biggest economy in the world, namely the EU.

He said there was a tendency to focus too singularly on Ireland when most countries faced the same challenges in terms of tax.

Policy director of the Irish Tax Institute Cora O’Brien also addressed the conference, noting the current European proposals for a common consolidated corporate tax base were unlikely to remain the same given the sensitivities among member states regarding tax.