Companies will have to establish ‘substantial’ presence, financial watchdog warns 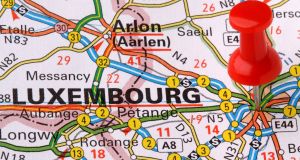 Some UK businesses are looking to establish a notional presence in Luxembourg to maintain so-called passporting rights. Photograph: iStock

Companies aiming to relocate from the United Kingdom to Luxembourg ahead of Britain’s exit from the European Union will have to establish a substantial presence in the country, including key decision-makers and functions, the Benelux nation’s financial watchdog said.

Some UK businesses are looking to establish a notional presence in Luxembourg to maintain so-called passporting rights that would allow them to continue selling all their services across the 28-nation region with minimum cost and disruption.

But Jean-Marc Goy, counsel for international affairs of Luxembourg’s Commission de Surveillance du Secteur Financier (CSSF), said it is “out of the question” and “unrealistic” for UK businesses to seek to establish a nominal presence.

“EU rules require substance in the jurisdiction where an entity is established and we in Luxembourg are very mindful that that substance complies at all time with the EU rules,” Mr Goy said after attending a CSSF roadshow to the Asia region.

Mr Goy said the CSSF would assess each application case by case.

“It will depend on the size and the technicality of the activities being relocated, but one thing is for sure: it cannot just be a postal address or a letterbox entity. That would be absolutely unacceptable.”

The CSSF will require companies to relocate a minimum number of staff, decision-makers and other key functions – covering IT, compliance, risk management and internal audit – and comply with minimum capital requirements, Goy added.

His comments followed a long-awaited speech last week by Theresa May in which the British prime minister ended months of speculation by outlining her vision for a so-called “hard Brexit” that will take Britain out of the EU single market.

Ms May promised to seek the greatest possible access to European markets but her speech put a decisive end to any hope harboured by London’s financial lobby that the City of London could keep financial passporting rights.

Goy said the CSSF has been in talks with British businesses looking to set up in Luxembourg, one of the world’s largest asset-management centres. He declined to provide numbers but said that the watchdog did not anticipate an influx of tens of thousands of UK staff. – (Reuters)