Donohoe says State will have to run budget surpluses in future 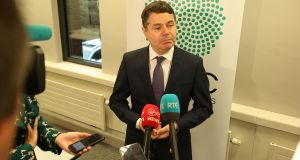 The Minister for Finance Paschal Donohoe: “Change is coming”.

Brexit uncertainty and the prospects of radical and unpredictable reforms to the global corporate tax system require the State to plan for budget surpluses over the next few years, the Minister for Finance Paschal Donohoe has insisted.

Speaking in Brussels on the margins of a meeting of European Union (EU) finance ministers, Mr Donohoe pledged to engage closely with work being done within the Organisation for Economic Cooperation and Development (OECD) on international taxation of business.

Proposals are due to emerge from the so-called Beps (base erosion and profit shifting) process in the OECD early next year, and ministers were yesterday discussing EU input.

“2020 will be taken up with engagement inside the OECD to see if agreement is possible on a new wave of global tax changes.

“Change is coming. That will mean change for Ireland because it is in our very long term interest to be inside any model for global tax reform,” the minister said.

Mr Donohoe welcomed the publication on Thursday of the European Commission’s autum economic forecasts, specifically on growth of 3 to 3.5 per cent in the next two years, which he said corresponded to those of the Government.

“If we look at that kind of growth rate we are seeing a moderation in Irish economic growth as our economy moves into a more mature phase. The prospect of an economy to grow at between three and three and a half percent over a number of years is an exceptionally positive prospect if we can realise it, as it offers the prospect of, over time, continued improvement in living standards and a continued resources available to invest in public services .

“What I think is critical if we move into that phase, if we avoid a no-deal Brexit occurring, is that we don’t take decisions that lead to us moving beyond the ability of the economy to grow at a particular rate.”

In that context the minister was adamant that it would be wrong to rely on buoyant corporation tax receipts.

“In relation to corporate tax policy,” he said of arguments he should use booming receipts to pay for current programmes, “we are already investing a very large amount of taxpayers money in our hospitals and services, but we have to be looking at ways in which we can grow our surplus because, if I look at the work that is underway in the OECD, we just need to be careful that we don’t end up relying on money that might not be there in the future. And we are looking to get that balance right . . .”

Mr Donohoe gave a warm backing to new proposals from German finance minister Olof Scholtz for a Europe-wide banking deposit insurance scheme. He said it was “a really important development” and that he sensed a new mood among ministers over the prospects of completing stalled banking union negotiations. Ireland, however, did not support the minister’s related proposals for harmonisation of banking taxation.

“It is in the interests of Irish banks, for those who deposit in them, for those who depend on them for investment and lending, it is our interest to see a strong banking union develop across Europe,” he said.

Responding to new figures from the commission that suggest Ireland’s annual contributions to the EU could rise by €760 million a year if its budget plans are approved, the minister would not be drawn on specifics of what he said were ongoing negotiations.

But he said the EU budget “has been very very good value for Ireland” and “in any scenario in the future we are going to continue to be a net contributor and the scale of that net contribution is going to grow”.

He reiterated the Taoiseach’s support for the maintenance of CAP spending and the reinforcement of spending on research and innovation. Ireland, he said, would also enter the talks in the spirit of itself have received important assistance from the EU budget in cohesion funding.

It’s a long and expensive wish list, and Mr Donohoe promised that he would speak to the Dail shortly on “what we think the different scenarios could be in terms of cost”.

1 Chris Johns: Boohoo exposed on pay and conditions in digital economy
2 Hotel bookings collapse in wake of additional Covid restrictions
3 In this strangest of recessions, what happens next for Ireland?
4 Estée Lauder staff at Dublin airport plan further strike action
5 Michael O’Leary is the boss you want to lead an airline out of crisis
6 Best Covid-19 ‘influencers’ will avoid hectoring
7 Should I switch bank now with Ulster Bank at risk of closing?
8 Dunnes Stores set to enter grocery delivery market
9 FBD changes wording of business insurance policies amid fight over virus payouts
10 Nokia timeline
Real news has value SUBSCRIBE