Donohoe raises prospect of more jobs than we can fill soon 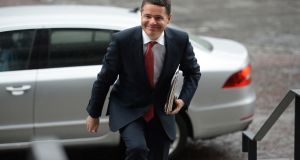 Minister for Finance Paschal Donohoe has raised the prospect of more job vacancies in the economy next year than people to fill them.

Speaking after the National Economic Dialogue in Dublin Castle, Mr Donohoe said: “We might get to a point next year that we have more work available in our economy than we have people to do it.”

He was responding to two recent economic reports, which signalled the likely return to full employment in 2018. The reports by the Economic and Social Research Institute (ESRI) and the Irish Fiscal Advisory Council (Ifac) also warned the economy might begin to overheat if the current trends in employment and house prices continued into next year.

“I have recognised this as a possibility that could occur in the future and one that we need to take account of,” said the Minister.

Separately, Mr Donohoe said he was confident the Government would hit its tax targets for the year despite the current weakness in exchequer revenue.

Speaking ahead of half-year exchequer returns on Tuesday, he acknowledged there had been a “softness” in several key tax streams this year.

However, he said the gap between actual and expected receipts, particularly in income and corporation tax, was likely to unwind before October’s budget, paving the way for a planned fiscal adjustment of €1.2 billion.

“I’m confident, with the information that is available to me at the moment, that we will deliver on our targets,” he said.

Addressing a question on whether the Government was pursuing pro-cyclical budgetary policies, which could overheat the economy, Mr Donohoe said the Government’s drive to reduce the deficit and the use of the AIB share sale proceeds to pay down the national debt were examples of counter-cyclical initiatives.

Even though using the €3.4 billion from the AIB sale to pay down debt was required under the EU’s fiscal rules, Mr Donohoe said it was the right thing to do.

“Th reason why I made that decision reflects a determination to ensure that while our economy is going a certain way we’re building up buffers for the future.”

Mr Donohoe signalled tax reform and tax reduction would be a key part of the Government’s budgetary agenda and that changes would be geared towards generating more work.

“For the Taoiseach and I, it is about doing things and making changes that are affordable not just in the year in which we announce them but beyond,” he said.

Earlier Ifac chairman Seamus Coffey told the conference the Irish economy is now at a similar juncture to where it was in the late 1990s with strong growth and accelerating employment pushing it close to full capacity.

“The question back then was what happens in the future” and there was a consensus that the economy would return to a sustainable level of growth of 3-3.5 per cent because of the constraints.

However, Mr Coffey said we overcame these contraints by borrowing money, which fuelled a construction boom, while growth was also aided by the influx of foreign workers.

“So the issue now that we’re coming back to full employment is whether we are going to ease back to a sustainable growth rate of 3 per cent or are we going to have an unnecessary stimulus that could lead to problems once that high growth rate stops.”