Largest fall in Dublin city, where supply fell 19% in the 12 months to July 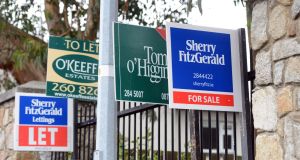 The number of houses advertised for sale in Ireland in July was down 9 per cent year on year, according to an analysis by Sherry FitzGerald. Photograph: Cyril Byrne

The number of housing units for sale in the State fell 9 per cent to 25,100 in the 12 months to July, according to an analysis by Sherry FitzGerald, the country’s biggest estate agent.

The figure equates to just 1.3 per cent of the State’s total private housing stock, and is more than 50 per cent lower than the 53,900 units advertised for sale in July 2010.

The company said the stock of properties available for sale was now critically low in all urban areas, and that this would “inevitably” fuel further property price inflation, which is currently running at close to 12 per cent.

Sherry FitzGerald’s analysis of second-hand properties for sale in the Irish market is based on the units advertised on property websites myhome.ie and daft.ie, which cover most of the market.

It showed that in Dublin, the fall-off in supply was even sharper, with just 3,900 units advertised, down 13 per cent on a year earlier.

That represented just 0.8 per cent of the capital’s private housing stock and compared with 4,500 units available in July 2016.

Seven years ago the number of housing units advertised for sale in Dublin was 7,100, reflecting the level of depletion that has occurred in the intervening period.

In a normal housing market, the level of churn, or the proportion of existing housing stock for sale at any one time, is usually about 5 per cent.

All Dublin areas down

The largest fall was in Dublin city, the most populous part of the State, where supply fell 19 per cent year on year.

The stock of available property in Dublin’s commuter counties of Meath, Kildare and Wicklow was also down on an annual basis by an average of 0.9-1.4 per cent in each county.

“As such it is essential that every effort is made to support the development of new housing stock, particularly in the large urban areas, where the crisis is most pronounced.”

Galway, Cork and Limerick also saw reductions in supply over the past year. Both Galway city and Cork city now have less than 1 per cent of their total private housing stock available for sale, which translates into 271 units in Galway city and 451 in Cork city.

Limerick city had a total of 220 units advertised for sale as of July, which is equivalent to 1.2 per cent of total private stock.

A recent report by the same company revealed that owner-occupiers accounted for about 71 per cent of all transactions, while investors made up about 20 per cent of the transaction activity.

An analysis of vendor profiles revealed that the volume of private investors leaving the market during the first half of 2017 remains high at 33 per cent of the total, with a further 10 per cent of vendors selling due to bank repossessions.