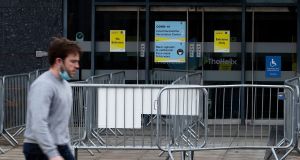 A man passes the entrance to the vaccination centre at the Helix in DCU, Dublin. Photograph: Brian Lawless/PA Wire

Irish consumers have emerged from the doldrums of January and are feeling more positive about the country’s economic outlook, on the back of vaccine hopes and slowing virus numbers, according to the findings of a new survey by KBC Bank Ireland.

Household financial fears continue to weigh, however, indicating that “permanent scarring” could be an issue for the Irish economy.

According to the KBC’s consumer sentiment survey, the index increased to 70.8 in February from 64.9 in January, a 5.9 point gain that reversed more than half of the 9.7 point drop seen between December and January. After an unexpectedly sharp rise in the incidence of Covid-19 and a related ramping-up of health-related restrictions on economic activity, consumer sentiment plunged in January.

The most notable month-on-month improvement in the February survey came in the “macro” aspects that focus on the general outlook for the Irish economy and the prospects for jobs.

The February sentiment survey also saw a significant improvement in thinking on the outlook for jobs. While negative responses continue to outnumber positive responses, the gap narrowed materially to produce the best reading for this element of the survey since February 2020.

Irish consumers were also less pessimistic about the outlook for their personal finances in February than in January, while spending plans improved marginally.

“While this may suggest households will spend somewhat more freely as the year progresses, there is little in this result to suggest Irish consumer spending will be released ‘like a coiled spring,’ ” Mr Hughes said.

Despite the pick-up, however, consumers remain cautious, with February’s reading, of 70.8, significantly short of the now 25-year average of the series, which stands at 86.9. This shows that consumer confidence is still at muted levels.

More than half of those responding to the survey said the pandemic had negatively affected their finances, compared with 12 per cent who saw an improvement.

According to Mr Hughes, the scale of the impact on consumers may mean that “permanent scarring” will be a bigger issue than pent-up demand for Irish economic outlook.