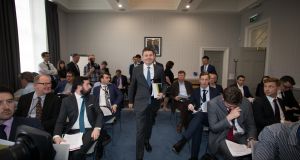 The Department of Finance has hit back at criticism of its budgetary strategy from the Irish Fiscal Advisory Council (Ifac), insisting its plans were given “a clean bill of health” by the European Commission.

In its latest assessment, Ifac was again critical of the Government for failing to keep spending in check while highlighting the risk to the exchequer from a reversal in corporation tax.

However, the Department of the Finance said Ireland was one of just nine euro area states to have its budget plans approved by Brussels.

It also noted that expenditure overruns for this year, expected to be in the region of €700 million, would be absorbed within the budgetary package for next year, an approach Ifac welcomed. “This is the first time this has been done,” a spokeswoman said.

She also noted that Ifac had endorsed, in its pre-budget assessment, a budgetary package of €2.8 billion. “The actual package was €2.9 billion,” she said.

On the current corporation tax windfall, “this is something the Government is acutely aware of,” she said, noting the department had published a report on the State’s fiscal vulnerabilities on budget day, which set out the risks to Ireland’s corporation tax base.

“Running budget surpluses is the best way of addressing this vulnerability. This is what we are doing,” she said.

The establishment of the so-called rainy day fund to prepare for possible future shocks was also part of this, she said.

The council also queried some the Government’s assumption around a hard Brexit, noting its forecasts for consumer spending and employment pointed only to a modest impact.

“The Fiscal Council endorsed the economic forecasts on which the budget is based - this included the assumption of a disorderly exit of the UK from the European Union which was the appropriate assumption at the time,” the spokeswoman said.

In its report, Ifac warned that Government spending this year was likely to overshoot by about €700 million, in part because of overruns in health. It also noted that Budget 2020 involved a spending hike of 4.4 per cent, which was significantly ahead of the 3.1 per cent signalled earlier in the year.

This was close to the maximum sustainable limit, it said.

The council also warned that up to €6 billion, or 60 per cent of the Government’s corporation tax windfall may be temporary, leaving the public finances extremely exposed to a potential reversal.