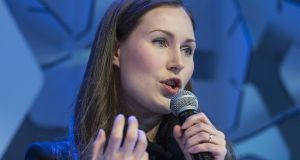 Speaking at the World Economic Forum in Davos, Switzerland, 34-year-old Ms Marin said the issue can’t be left to the private sector.

“You need laws and structures that lead the way to gender equality,” Ms Marin said during a panel debate on Thursday. “It doesn’t just happen by itself.”

The concern is that an unconscious bias kicks in, steering men in a position to hire toward “similar-minded and similar-looking people” who are deemed to be “more qualified,” she said during a panel discussion on social mobility and gender parity.

The Social Democratic head of government, who rose to power last month, has made headlines the world over for her socially progressive views. That includes a discussion of the merits of a four-day work week as technology increases productivity.

Despite Finland’s image as a bastion of equality lacking distinct social classes, the Nordic nation also has work to do on this issue. Women earn an average 84 cents per €1 earned by men, and do an hour more housework each day – but they also have more degrees in higher education.

“We in Finland don’t have enough men in health care and social care,” she said, adding that “we need more women in tech.”

“We all have to fight each and every day for equality, for a better life,” she said. “It’s not somebody else’s job.” – Bloomberg