Michael Noonan: ‘Ireland does not compete on tax alone’ 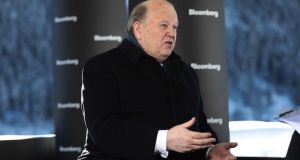 Ireland’s potential to secure future investment does not hang solely on its low rate of corporation tax, Minister for Finance Michael Noonan will tell a conference on corporate tax hosted by The Irish Times on Tuesday.

The Minister will note that Ireland does not compete on corporation tax alone but on access to Europe’s single market and that it has a number of distinct advantages over competitors, including its highly educated, English-speaking workforce.

In his address, he will also touch on the twin threats posed to Ireland from Brexit and a potential US clampdown on multinational tax avoidance under president Donald Trump.

Concerns have been raised that a hard Brexit could see Britain ditch its current economic model in a favour of a Singapore-style low-tax economy to the detriment of Ireland.

There are also fears that Mr Trump’s promised clampdown on the offshoring of multinational profits may adversely affect Ireland as the main beneficiary of US multinational investment outside of the US.

However, Mr Noonan is expected to play up the potential financial services dividend to Ireland from a hard Brexit.

At the World Economic Forum in Davos last week, he confirmed that more than 100 London-based financial services companies have expressed an interest in moving to Ireland in the wake of Brexit.

Mr Noonan is also expected to play down the threat posed from US tax reform, which has been signalled before and is by no means assured of getting through the US congress.

In his speech, he will also note how Ireland has already benefited from greater international co-operation on tax, while insisting that the State’s headline rate of corporation tax would remain a matter of national sovereignty.

Also speaking at the conference will be PwC’s Joe Tynan, who will also outline the challenges currently facing Ireland from Brexit and US tax reform.

He will say that Ireland will remain an attractive location for business regardless of Brexit or US reform because it is strategically located within the largest and wealthiest economy in the world, namely the EU.