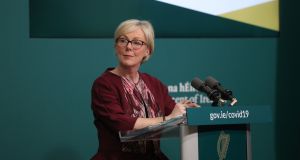 Proposals on the future of the Pandemic Unemployment Payment (PUP) will be brought forward ‘over the next week or so’, Minister for Social Protection Regina Doherty has said. File photograph: Nick Bradshaw/The Irish Times.

Proposals on the future of the Pandemic Unemployment Payment (PUP) will be brought forward “over the next week or so”, Minister for Social Protection Regina Doherty has said.

Introducing revised financial estimates for her department, which is seeking an additional €6.8 billion to cover the weekly €350 payments and a wage subsidy scheme, Ms Doherty said she was happy to confirm again that the payments would extend beyond the original June end date.

“Any future decisions will be based on our commitment that everyone who needs help will get the most appropriate assistance and also based on the evidence we receive from the reopening of the economy,” she said.

The Minister added that “we are currently considering this and intend to bring forward proposals for some changes over the next week or so”.

A call had been made for people to be given certainty about the future of the payment and wage subsidy scheme as the Dáil debated the revised estimates.

Fianna Fáil social protection spokesman Willie O’Dea warned that there should not be a “cliff edge” drop from €350 to the €205 paid as jobseeker’s allowance.

He said he could not believe that approval was being sought for €6.84 billion of social welfare payments “but without any information whatsoever about the future” of the PUP.

Mr O’Dea said he resented recent references to 200,000 people who are apparently being better off while receiving the payment than working. He criticised allegations that they were “gaming the system” and lying on the couch watching TV rather than going back to work.

He said 40 per cent of those on the payment had previously been earning €300 or less and the “vast majority” were working part time.

Mr O’Dea said those talking about PUP recipients being better off “are blissfully unaware that the Government has clearly signalled that if the pandemic payment exceeds their earnings there will be a clawback”.

Ms Doherty said that while there was fraud in the system in the same as every country, it was small numbers in this case.

“There is nobody gaming the system and nobody will lose their payment,” she said, adding that the payments would not suddenly be “ripped away”.

The Minister said she was seeking approval for the additional funds, which would bring the estimate for her department to more than €28 billion for the year. She said the extraordinary events brought about by the Covid-19 pandemic meant the original estimate “will no longer be sufficient to cover the expenditure of the department”.

She said given the scale of the “exceptional measures” needed in response to the pandemic “we will within the next week or so, reach the ceiling” when 80 per cent of allocated funding would be used up. This was happening “much earlier in the year than we could have considered possible a few months ago”, she said.

Ms Doherty said the funding was not just for “payments related to the pandemic but also to all of our ordinary payments - child benefit, pensions, carers’ payments, payments to lone parents, payments to people with disabilities and much more besides”.

“As we gradually move through the phases of reopening our society, we do need to review the nature of the Pandemic Unemployment Payment and how it fits into cross-Government plans to keep Ireland healthy and get the country working again,” she said.

The Dáil heard there are 13 different categories of expenditure related to Covid-19 which give rise to the requirement for the additional €6.8 billion. The PUP and wage subsidy scheme would cost €4.3 billion up to June 12th and jobseeker’s related benefits would costs nearly €4.2 billion for the year, Ms Doherty said.

The Minister said the Back to School Clothing and Footwear Allowance costing an additional €98.9 million while enhanced illness benefit to for Covid-related illness or self-isolation was estimated at €74 million.

Rent supplement is projected to cost an extra €70 million, increased spending on redundancy is estimated at €44.5 million and insolvency costs are estimated at €8.9 million. Four additional weeks of fuel allowance in March and April cost €34 million and €5.5 million has been provided for 1,000 additional places on the community employment and Tús schemes.