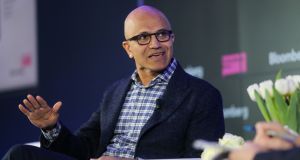 Microsoft’s chief executive has warned that countries which fail to attract immigrants will lose out as the global tech industry continues to grow.

“Every country is rethinking what is in their national interest,” Satya Nadella said in an interview with Bloomberg News at Davos. Governments need to “maintain that modicum of enlightenment and not think about it very narrowly”.

“People will only come when people know you’re an immigrant-friendly country,” he added.

Mr Nadella has previously voiced concern about India’s citizenship amendment act, which bans undocumented Muslim migrants from neighbouring countries from seeking citizenship in India, while allowing immigrants from other religions to do so, calling it “sad”.

However he said he remained hopeful. “I’m an India optimist,” he said. “The fact that there is a 70-year history of nation building, I think it’s a very strong foundation. I grew up in that country. I’m proud of that heritage. I’m influenced by that experience.”

Microsoft has also recently unveiled plans to invest $1 billion to back companies and organisations working on technologies to remove or reduce carbon from the atmosphere, saying efforts to merely emit less carbon aren’t enough to prevent catastrophic climate change.

“We will now have to make sure all our data centre operations are first consuming renewable energy,” Mr Nadella said.

Microsoft and Amazon. com, along with other technology companies, have been criticised for supplying software and cloud services to large oil and gas companies such as Chevron and BP. BlackRock’s Larry Fink has been trailed to work and public engagements by protesters criticising the investment firm for inaction on global warming and other issues.

Activists have been pushing for companies to stop working with the largest producers of greenhouse gases. BlackRock has said it will cut exposure to thermal coal as the world’s largest asset manager moves to address climate change.

Mr Nadella declined to comment on whether Microsoft would stop working with major carbon producers. “The energy transition is going to include all of us,” he said.

On the battle with rivals Alphabet and Amazon over winning new cloud customers, Mr Nadella said he believes Microsoft has the advantage.

“We’ve had competition in the past in the previous era and in this era we have new competitors and we feel very good about our position,” he said. “We if anything have an architectural advantage.”

In October, Microsoft beat Amazon for a $10 billion Pentagon cloud contract, a deal Amazon had been seen as the favourite to win. – Bloomberg