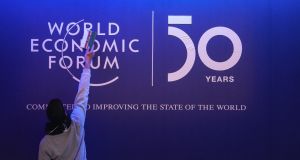 World leaders and corporate executives gather at the World Economic Forum in Davos. Joe Brennan will be reporting from Davos this week.

Chief executives are less confident about their own companies’ sales growth than at any time in the past decade, with some 53 per cent of business leaders globally see economic growth declining this year, according to a survey published as world leaders and corporate executives gather at the World Economic Forum in Davos. Joe Brennan will be reporting from Davos this week.

On the Brexit front, Boris Johnson’s official spokesman said the prime minister had made clear Britain was seeking a Canada-style free trade agreement with no alignment with EU rules. However, speaking in Brussels, Tánaiste Simon Coveney said: “There is no way that the EU will ever sign up to a trade deal that allows tariff-free, quota-free and frictionless access to UK goods coming in to the EU if there isn’t a level playing field in terms of how they are produced.”

With housing in the election spotlight, estimates published today show builders finished more than 21,000 new homes in the Republic last year, a 10-year high but below level needed to meet future demand for housing.

Mark Paul reports that Nama has agreed to lend about €15 million to Cosgrave Developments to build out the last tranche of a massive housing development in south Dublin with almost 1,100 units.

Tim Cook paid a flying visit to Ireland on Monday to pick up an award and receive the plaudits of the Taoiseach who said Apple has played a key role in making “Ireland the tech capital of Europe”. Ciara O’Brien reports from the ceremony.

In her media and marketing column, Laura Slattery considers the dystopian society where smart fridges not only serve to remind you of expiry dates, but are tools of the advertising trade. That day is near.

Finally, in our personal finance coverage, we look at how to secure the best deal in health insurance, and ask if investors should drop their ‘shorts’.