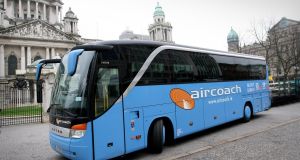 Profits rise at Aircoach on back of revenue growth

The growth of Dublin Airport and the increase in city-based events in Dublin were key to the increase to €30.2 million in revenue at private bus operator Aircoach last year, according to its directors.

Accounts for Last Passive Ltd show an increase in slight revenue to €30.2 million from €29.8 million and pre-tax profits of €4.719 million in the 12 months to the end of March 30th last.

Numbers employed at the company increased from 200 to 216 as staff costs went up from €8.8 million to €9 million due to need for additional drivers.

According to the report “there was strong passenger numbers and turnover growth on all other routes, other than Cork which experienced competition from other operators”.

The report said that there was an increase of €400,000 in traffic costs where third-party coach hire was required to cover additional events.