Consumer sentiment edged higher in May despite outlook

KBC Bank Ireland/ESRI index increased to 106.7 in May from 104 in April 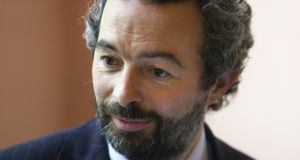 KBC Bank chief economist Austin Hughes said there were more positive than negative responses to all of the main elements of the survey. Photograph: Frank Miller

Irish consumer sentiment edged higher in May as spending plans improved in spite of increased uncertainty about the general economic outlook and prospects for household finances.

The KBC Bank Ireland/ESRI consumer sentiment index increased to 106.7 in May from 104 in April, reversing about two-thirds of the drop seen between March and April.

“With more positive than negative responses to all of the main elements of the survey, the May reading suggests the mood of Irish consumers remains one of guarded optimism,” said KBC Bank chief economist Austin Hughes.

“However as the May index is lower than that seen in either January or March, the survey continues to hint at a recovery that from the perspective of the average consumer is patchy rather than progressive.”

The May survey results saw three of the five key elements of the sentiment index registering stronger readings than in April whereas the remaining two were slightly weaker than a month earlier.

The two elements of the May sentiment survey that were weaker than their April counterparts were consumers’ expectations for the Irish economy and their household finances over the next 12 months.

“So, there seems to be an increasing divergence in consumers’ expectations for the year ahead.”

After a notable drop in April which KBC attributed to layoff announcements in a couple of high-profile Irish companies, there was only a marginal improvement in the employment element of the survey in May.

There was a similarly modest and partial retracement of April weakness in consumers’ views of their household finances over the past 12 months.

The strongest element of the May survey compared with April was in relation to household spending plans. “Again a key element was a correction of particular weakness in this area of the survey in April,” said Mr Hughes.

“As we noted previously, volatility in consumers’ buying intentions is partly a reflection of a structural change in which spending is more heavily concentrated around specific occasions, such as Easter or summer holidays, or around periods of heavy price discounting.

“More generally, we would interpret this volatility in spending plans as symptomatic of an Irish consumer who is either cash constrained or notably cautious (or both). There is certainly no sign in this or other elements of the sentiment survey of any exuberance in the behaviour of Irish consumers that might be symptomatic of an overheating economy at present.”

Mr Hughes said the pull-back in expectations both for the Irish economy as a whole as well as consumers’ own household finances also “sits uneasily with a bubbling economy at present”.

“There are sectors of the Irish economy experiencing strong growth at present,” he said. “In some instances, the current pace of increase could be problematic if it persists for another couple of years or if it were intensified by fiscal or credit largesse.

“However, there is little indication that either of these levers is currently overextended and the sentiment survey suggests consumers’ expectations are relatively modest rather than excessively demanding.”