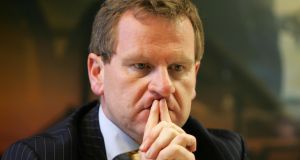 Ibec chief executive Danny McCoy. The Irish business representative group was among the most active lobbyists in the EU in 2017. Photograph: Eric Luke

Ibec, which represents more than 7,500 companies in Ireland, spent €1.3 million on lobbying activities in the European Union last year. This made it the third highest spender among business representative groups across the 28 member states after two organisations in Germany.

This has emerged from data compiled by the EU Transparency Register, a voluntary, self-declaring set of returns for lobby groups. It was introduced by the European Commission in 2014 and those filing returns must spend at least 25 per cent of their time lobbying EU institutions.

Ibec has four full-time staff based in Brussels but the overall spend is supplemented by employees at its base in Dublin, who would visit the Belgian city for specific meetings.

Overall, Ibec self-declared a full-time equivalent staff of 10 for the purposes of its EU interactions in 2017. In total, it has more than 230 staff in seven locations, and has 42 different trade associations under its umbrella.

Ibec is also the busiest lobbying group by far in Ireland, giving it an influential voice with Government.

In the period from the introduction of the lobbying register here in 2015 until April 30th of this year, Ibec had made 1,045 lobbying returns. This was about 30 per cent more than the nearest other organisation, which was the Irish Farmers’ Association at 805.

Macra na Feirme was third with 299 returns, while the Irish Creamery Milk Suppliers’ Association was next with 259.

In 2017, Ibec made 465 returns in Ireland, an increase of 43 per cent on the previous year. This included lobbying the Government on its policy priorities for the year, on the concerns of businesses over Brexit, and on matters such as the budget, State aid, the creation of an EU digital single market, energy policy, and climate change.

The register also shows that so far this year, Ibec has been involved in 308 returns.

Commenting on its lobbying activities, Ibec’s head of corporate affairs Siobhán Masterson said: “Ibec has established itself as the largest and most influential lobby group in Ireland. Policymaking has a profound impact on the economy and as our members employ over 70 per cent of private sector workers in Ireland, it is imperative that they have a voice at the table when policies are being debated and developed.

“In recent years, we have adopted a greater international engagement to reflect the globalised nature of our economy and to ensure our members are heard in Brussels, London, Europe and the US.

“Ibec’s ‘Model of Substance’ campaign has been influential in building a new narrative around Ireland’s intangible economy and we will shortly launch a new campaign, ‘Better Lives, Better Business’, which will seek to influence policymaking on how best to manage economic and population growth over the coming decades.”

Ibec represents both domestic and international businesses operating in Ireland, both big and small.