US tariffs: the opening salvo in a global trade war or another Trump bluff? 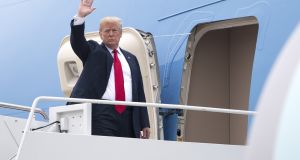 The Trump administration is imposing a 25% tariff on steel and a 10% tariff on aluminium from the EU, Canada and Mexico. Photographer: Bloomberg

After weeks of bully and bluster, US president Donald Trump has made good on a promise to impose tariffs on steel and aluminium imports, potentially signalling the beginning of a global war with negative consequences for the world economy, and for countries like the Republic, whose fortunes are tied to a liberal trading environment internationally.

In March, Trump stoked global trade tensions by announcing his tariff plan in an effort to protect US industry and workers from what he described as unfair international competition, but many observers thought he wouldn’t go through with it.

US commerce secretary Wilbur Ross, however, signalled on Thursday that a 25 per cent tariff on steel and a 10 per cent tariff on aluminium from the European Union, Canada and Mexico, which supply nearly half of the US’s imported metal, would come into effect from midnight. Whether this is one of Trump’s bullish positions that he will row back from in time or the beginning of a new era of protectionism is anyone’s guess.

What has been the reaction?

Predictably, the threat of a global trade war has sent a chill through financial markets, which are still shaky from political turmoil in Italy, with headline indices tracking down on foot of the news. Shares in big metal consuming companies like plane-maker Boeing and heavy machinery maker Caterpillar bore the brunt of the hit, declining about 1.5 per cent each. However, shares of US Steel and AK Steel jumped about 6 per cent each, while Nucor and Steel Dynamics gained more than 2 per cent. European Commission president Jean-Claude Juncker denounced the US move as “protectionism pure and simple”, while a UK government spokesman described it as “deeply disappointing”. Henrik Adam, Tata Steel Europe’s chief commercial officer, said the firm was disappointed by the tariff decision, and urged all parties involved to continue to work for a solution.

All eyes are now firmly on the EU, and the likely retaliatory action it will take. EU trade commissioner Cecilia Malmstrom said: “The EU’s response will be proportionate and in accordance with WTO rules.” The bloc has previously signalled that it plans to impose retaliatory duties on $3.3 billion in American products from Harley-Davidson motorcycles to Levi Strauss jeans as well as bourbon whiskey. The bloc also plans to take a case at the World Trade Organisation against the US import restrictions. Malmstrom said that throughout negotiations stretching over the past months, the US had tried to use the threat of trade restrictions “as leverage to obtain concessions from the EU”. “This is not the way we do business, and certainly not between long-standing partners, friends and allies.”

Has anyone tried to cost the likely fallout of a trade war?

According to Bloomberg Economics, a full-blown trade war could cost the global economy at worst $470 billion. Although that’s an extreme scenario, it’s no longer an impossible one, not after the US move. The Bloomberg research suggests the economic hit would channel through the world economy in a number of ways, starting with faster inflation that dents US consumer demand, which in turn hurts other economies’ exports. Retaliation would see the inflation shock replicated in other nations, with goods substitution hitting US exports.

What are the implications for Ireland?

New tariffs on aluminium imports into the US will hit Rusal, the Russian company that owns the Aughinish Alumina plant in Limerick, which employs nearly 450 staff. Aughinish provides alumina to some of the biggest users of aluminium in Europe which then export their products to the US. Rusal narrowly escaped US sanctions against Russia when owner Oleg Deripaska divested himself of a majority shareholding, but now finds itself in the eye of another storm. More generally, Ireland as a small open, export-led economy relies on a liberal global trading environment, and a trade war would effect it disproportionately more than other countries that are less plugged into the global economy. According to Department of Finance research, a 1 per cent deterioration in world demand would dampen Irish growth by 1 per cent and employment by 0.6 per cent over a five-year period.