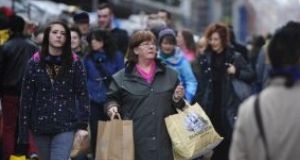 The consumer sub-indicator came in at 89.3, down 0.9 on November’s reading and 5.4 lower than this time last year

Bank of Ireland’s economic pulse indicator recorded its second lowest ever reading in December, coming in at 88.3, down 1.6 on the prior month, and 0.6 lower than a year ago.

BoI chief economist Dr Loretta O’Sullivan attributed the decline to a fall in both consumer and business sentiment during the month.

“While metrics like solid GDP growth and the low unemployment rate indicate that the Irish economy is performing well, we expected global trade tensions and Brexit uncertainty to temper the mood among households and firms in the second half of the year and this has proved to be the case,” she said.

The consumer sub-indicator came in at 89.3, down 0.9 on November’s reading and 5.4 lower than this time last year. The business pulse posted a reading of 88.1 in December, down 1.8 on the previous month.

The pulse surveys, which have run since April 2016, are conducted by Ipsos MRBI and include interviews with 1,000 households and about 2,000 businesses.