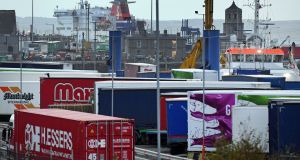 The SFA said small firms are expected to be more cautious until there is more certainty about the post-Brexit relationship between the EU and UK. Photograph: Paul Ellis/AFP/Getty Images

The Small Firms Association (SFA) has called on the Government to step up its preparations for a no-deal Brexit.

In its end-of-year statement, the organisation, which represents businesses that employ fewer than 50 people, said its members were on track to create 25,500 jobs in 2019.

However, it cautioned that “concrete steps”, including the implementation of a national small-business strategy, were needed from the Government to realise the potential of the sector.

Sue O’Neill, who chairs the SFA, said 2018 had been “a challenging but successful year” for small businesses.

“Difficulties attracting staff, Brexit and increasing business costs are the main obstacles for small businesses in Ireland. However, as the year draws to a close, feedback from our members shows small firms feel that the business environment is improving,” she said.

Despite the external risks to the economy, SFA members see opportunities for their businesses on foot of expected Irish economic growth and two-thirds plan to take on additional staff.

“These jobs will be in a wide variety of sectors, giving a boost to villages, towns and cities across Ireland,” Ms O’Neill said.

“However, concrete steps are needed from government to realise the potential of our small-business sector and enhance job creation permanently.”

The development of small business across all regions should be awarded “just as much energy and strategic focus” as is bestowed upon attracting foreign direct investment (FDI), she added.

Members are reporting nervousness around Brexit in light of the political stalemate in Westminster and this is having a knock-on effect on their intentions to invest in their businesses.

“In the run-up to Brexit, it is to be expected that small firms will be more cautious regarding investment decisions until there is more certainty of what the final relationship between the EU and UK will look like.”

1 Should my mam wait for house prices to drop before buying?
2 Parts of Brown Thomas and Arnotts to reopen next week
3 Brother is dragging his heels as executor of uncle’s will - is there anything I can do?
4 Apple tax case: Four individual lawyers paid over €500,000 each
5 Irish whiskey sales near milestone of 12m cases a year
6 Pet product firm’s directors restricted from involvement in companies
7 US takes aim at digital services taxes in EU
8 Covid-19 mortgage breaks: What’s the catch?
9 Man charged with stealing €31,000 from company account
10 ‘Jump’ in hotel enquiries after North confirms July reopening
Real news has value SUBSCRIBE