Reasons to be cheerful amid globalisation and rising inequality

Impact of government policy means increased inequality is not inevitable 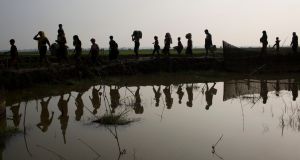 Inequality is not inevitable and does not flow automatically from globalisation. Governments make choices that directly determine the level of inequality. Photograph: AP

The turn of any year always elicits ‘state of the world’ articles as well as the usual reviews and outlooks. This columnist is no no different and has been struck by the reaction to two recent pieces that tried to strike a note of relative optimism – about the state of the world economy at least – amid all of the gloom. Cheerfulness, no matter how well hedged, is, I have discovered, not popular.

The tone of most responses revolves around three themes. First and foremost: ‘What about inequality?’ I am always asked: how can you be so blasé about the rich getting richer everywhere? And I always respond in the same way: analysis of the data is not the same thing as complacency. It requires a wee bit more effort than simplistic observations about the links between the rise of populism and the often repeated mantra that global inequality is rapidly increasing everywhere.

Data on inequality is plentiful. The best source I have found is Our World in Data by Max Roser of Oxford University. His most recent conclusion is as stark as it is clear: “It’s a mistake to think that inequality is rising everywhere. Over the last 25 years inequality has gone up in many countries and has fallen in many others . . . rising inequality is not ubiquitous, nor inevitable in the face of globalisation . . . politics and policy at the level of individual countries can make a difference.”

Across the globe, average inequality has actually fallen very slightly over the last 25 years, at least if we average each country. But there is a problem, especially in heavily populated countries: the ones that recorded some of the largest increases in inequality were the United States, China, India and Indonesia, accounting for 45 per cent of the globe’s population.

All of the data quoted so far uses Gini coefficients, a commonly-used measure of aggregate inequality. Like many single metrics of complex phenomena it is not without flaws. A different measure, the incomes of the top 1 per cent, also gives a more nuanced picture than is commonly supposed. Here, for example, we observe an issue for English-speaking countries: citizens there do, recently at least, live in a place where the rich get richer. But in much of continental Europe and Japan there is a very different narrative: the share of the top 1 per cent goes up and down but has been pretty trendless since the second World War.

Again, the conclusion is that context matters and policies can make a real difference. Inequality is not inevitable and does not flow automatically from globalisation. Governments make choices that directly determine the level of inequality. And different governments make different choices.

The next ‘what about?’ focuses on the world economy. A lot of commentators seem to think we are heading for a recession and that recent falls in stock markets merely confirms what they see as inevitable. They could be right but I envy their certainty. Humility should be the label on any economic forecaster’s spreadsheet. The list of things to worry about is long but it always is. A global recession is possible but is no more likely (I would guess less likely) than growth trundling on at roughly its current rate. Our knowledge of the drivers of the business cycle and the forecasting tools we have available to us simply do not allow for more definitive conclusions. Anybody who says differently is selling you snake oil.

‘What about the environment?’ Here, I am as scared as anyone who looks at the data and the science. It’s hard, but not impossible, to be optimistic. The only crumbs of comfort that I see are the actual and prospective falls in the price of wind and solar energy, along with observing that some scientists think the quality and price of electricity storage is also likely to fall significantly. It’s not my area so I guess my optimism is partly faith-based: a belief that technology will be at least part of a solution.

It is so easy, but also so lazy, to write pieces that see the world going to hell in a handcart. There are so many ways in which it is getting better. Life expectancy, with some recent glaring wobbles in the US and UK, has steadily been improving for decades. Child mortality has fallen dramatically, nowhere more so than in Africa. Incomes, notwithstanding that inequality debate, have grown exponentially for huge swathes of the world’s population. The list of ways in which things are getting better is a long one.

Just because because something has improved doesn’t mean that things shouldn’t be better or that the existing state of affairs is acceptable. That many of us live in more comfortable homes than did the robber barons of the gilded age is of no comfort to the homeless. We should celebrate things such as falling child mortality but need to be aware, in the case of those African numbers for example, that 8 per cent of children still die before their fifth birthday. That compares with 32 per cent in 1950. Globally, the respective numbers are 4.5 per cent and 22 per cent (as above, data from Max Roser).

Context is important and nobody is claiming we live in Utopia. But it isn’t a dystopia either.