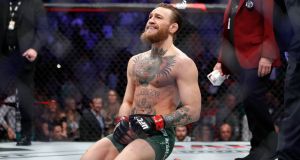 The company still has accumulated losses of €130,649, but that is unlikely to trouble the 32-year-old Dublin man recently estimated by Forbes to have earned around $48 million (€40m ) this year.

McGregor did not appear in the octagon during 2019, but returned there in January with a first-round knockout of Donald Cerrone, He reportedly made $30 million from the fight – $3 million for the bout and the rest from pay-per-view sales.

McGregor announced his retirement from the sport last June, but is due to return to the octagon next month to fight Dustin Poirier.

Last year was the first full year of sales of McGregor’s Irish whiskey, Proper No. Twelve, with the brand becoming the fourth most popular in the world last year with shipments of 213,800 cases.

McGregor Sports and Entertainment Ltd was established in July 2014 to exploit the former plumber’s earning potential and is engaged in management, promotion and endorsements in the sporting sector.

The new accounts – approved by the company’s directors last Thursday – show that the cash pile at his firm last year increased from €1,761 to €38,555.

The company is currently engaged in a brand battle with Schiphol-based McGregor IP in the Netherlands to have the Conor McGregor and other McGregor-related trademarks registered across the EU.

McGregor’s long-term partner Dee Devlin is a director of the company along with long-time friend Alan Geraghty. Directors’ pay last year came to €108,000, the same as in 2018.