Fintan O’Toole: Brexit means Ireland must be the anti-England

Seeing ourselves as opposites used to be a bad idea. Now it might be a necessity 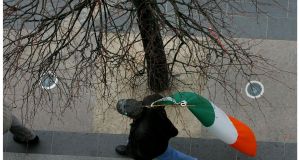 The gradual demise of the mentality in which Ireland was merely the opposite of England has done us nothing but good. Photograph: Bryan O’Brien

Being the anti-England is not about being anti-English. Irish Anglophobia is dead and if it ever stirs again we should place another stake through its heart, just in case. What’s at play is something different: a way of thinking about Irish identity that was summed up with typical pithiness by Samuel Beckett when he was asked “Vous êtes anglais?”: “Au contraire.” Irishness, in one deep stream of thought and feeling, was the opposite of Englishness.

England was urban; so Ireland had to create an image of itself that was exclusively rustic. The English were scientific rationalists; so we had to be the mystical dreamers of dreams

Identities are often defined by what they not, and this form of negative self-identification came naturally to an Irish nationalism struggling to break the link with a country that dominated not just us but much of the world. In our dictionary, “us” could be defined simply as “not them”.

It worked in so many ways. England was Protestant; so Catholicism had to be the essence of Irish identity. England was industrial; so Ireland had to make a virtue of its underdeveloped and deindustrialised economy. England was urban; so Ireland had to create an image of itself that was exclusively rustic. The English were scientific rationalists; so we had to be the mystical dreamers of dreams. They were Anglo-Saxons; we were Celts. They had a monarchy, so we had to have a republic. They developed a welfare state; so we relied on the tender mercies of charity.

Most of this was nonsense of course. Actual Irish people quietly chose to live in urban, industrial, welfare state England. But nonsense can be powerful. The idea of being the anti-England hung around like a bad smell long after it had ceased to have any purpose.

It locked Ireland for far too long into a sectarianism that equated Irishness with Catholicism and into the lie that the misery of rural poverty was really a mark of national nobility. It allowed us to devalue science and exalt the irrational. It convinced us that we actually had a republic merely because we didn’t bow before the English throne. It excused the slow and inadequate development of a state that places public welfare at its heart.

Brexit and the English nationalism that underlies it are redefining England for the rest of the world as an angry, hostile, unlovable place

The gradual demise of the mentality in which Ireland was merely the opposite of England has done us nothing but good, even though it could be argued that we’ve never managed to replace this negative identity with a fully positive one. So why the hell would we want any part of it back? Because, of course, Brexit and the English nationalism that underlies it are redefining England for the rest of the world as an angry, hostile, unlovable place. And it’s vital for Ireland that we are clearly distinguished from that new English identity.

This – to stress again – has nothing to do with hostility to England or the English. Geography, history, economics, politics, family, friendship and common decency all give Ireland an overwhelming interest in England’s prosperity. There is no satisfaction in seeing our neighbours harm themselves by adopting forms of national self-assertion that we know from our own experience to be self-destructive. Ireland should and will do everything it can to keep England as close as possible to the European Union and as alert as possible to the dangers and delusions of reactionary nationalism.

But this goodwill on our part may have very few practical consequences. Brexit may well prove to be unstoppable and we have to react it to it by thinking again about how we want to be seen in the world. The State has, so far, reacted by making the world, and especially our fellow EU members, acutely aware of how closely our fate is tied to England’s, how much their decisions are our destiny.

This is quite right, not least because it’s obviously true. In the longer term, however, we also have to do something else. We have to define ourselves for the rest of the world as not-England. This is not just about being a separate space; it is about being an opposing kind of space. We have to write “Au contraire” on our banners again.

It is as absurd as it is sad that we’ve reached a point where these qualities would make Ireland so radically unEnglish.