Chris Johns: It’ll be déjà vu all over again when we start planning for a hard Brexit in 2020 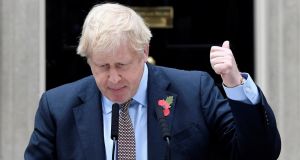 The more UK prime minister Boris Johnson promises a quick trade deal with the US, the higher will be the barriers with the EU. Photograph: Toby Melville/Reuters

Bafflement and boredom are the two most common responses to Brexit. Just wait until the trade negotiations start. Brussels and London are gearing up for January or February.

That assumes a Johnson election victory – the alternatives are too messy to plan for. A hung parliament means further chaos; a Labour government (in some kind of coalition) promises another renegotiated withdrawal agreement and another referendum. Messy indeed.

Nobody in Brussels thinks 11 months will be long enough. It’s never been done before – it always takes years. Brexiteers say it is possible given the unique starting point of complete trade alignment. That’s a delusion since it ignores the fact that no trade treaty in history has ever erected rather than dismantled barriers.

The more Johnson promises a quick trade deal with the US, the higher will be the barriers with the EU. Given lack of time and Johnson’s commitment to no extension of the transition period, we will quickly be back to planning for a hard Brexit at the end of 2020. Déjà vu all over again.

Johnson doesn’t mean what he says. That’s a good rule of thumb. Websites are appearing that track his lies (I recommend Peter Oborne’s). So, just as he sooner or later reneges on just about everything and everybody, he could easily announce, or ask for, an extension of the transition period.

On this, and possibly only this, I’m inclined to take him at his word. Extension means more EU budget contributions. Given the way in which British general elections come round every other year, he won’t want to be in the position of still, de facto, being in the EU at the possible time of his next attempt to stay in Downing Street, his only ambition worth paying attention to.

So, the highest probability outcome is a hard Brexit at the end of next year. Or, at least, months of familiar speculation about one. With all of the attendant economic and political uncertainty and damage.

We can do nothing about our ennui but enlightenment is possible. That, of course, requires effort and engagement with facts and detail.

One of the reasons why Brexit is taking so long is the unwillingness of one side to do the hard yards. British Brexiteers continue to make assertions that fly in the face of reality. Just watch Johnson’s mumbling and stumbling speech last Thursday where he promised no checks of any kind between Britain and Northern Ireland. He doesn’t understand his own deal. He described his deal as terrific for Northern Ireland because it means continued single market membership and maintenance of freedom of movement. It’s nice to know that irony is flourishing.

Denis MacShane, a former British politician, coined the term Brexeternity that perfectly captures all of this. In 2014, he wrote a book in which he correctly predicted that Britain would vote to leave. In a recent article, written under the auspices of the London School of Economics, he takes us through the history of anti-EU thinking. He describes how both the left and the right across Europe have typically been opposed to the European project. And at the more extremes of left and right parties, the more extreme the anti-EU rhetoric.

Jacob Rees-Mogg, for instance, didn’t invent the accusation of “vassalage” against the EU. Recently deceased Jacques Chirac, originally a communist who went on to be prime minister, president and mayor, railed against the EU in 1978 in distinctly Brexiteer tones. France, he said, must say Non to becoming a vassal state of a federal Europe.

James Callaghan, the only person to have held the four great UK offices of state, also began his political life on the far left. MacShane reminds us that, in 1971, Callaghan was making proto-Faragist speeches that argued the reason why Britain should have nothing to do with Europe is that they don’t speak English. Both the main British political parties have had long Europhobic periods.

Anti-EUism is a pose that extremists adopt. Two forces are at work. First, extremists seek chaos. Second, they see conspiracies everywhere. The EU is a conspiracy against workers or capitalists, depending on where you stand. What extremists don’t really care about is Europe: their opposition is merely a means to an end and/or driven by a demented world view.

Matt Levine of Bloomberg wrote this week about how online discount brokerages are inadvertently permitting traders to cheaply adopt massively leveraged market bets. The game that some investors play isn’t just to make money. It’s about bragging rights. It’s being able to boast how they hacked the stock market.

Similar motivation was seen in the run up to the financial crisis. Traders wanted to make money for sure, but also loved to boast how the invention of things like CDOs were akin to the video game hacks they sought during their downtime. Brexiteers are sometimes like that: Dominic Cummings looks like a video game hacker, one who just happens to delight in hacking the political system.

MacShane puts it beautifully: “The EU is imperfect . . . but it is the best effort made in two millennia of European history to allow such different peoples to live relatively harmoniously together.” Extremists and hackers have very different ideas. And they are winning.