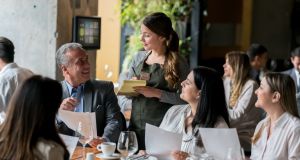 The business activity index includes everything from hotels and hairdressers to IT firms and telecoms. File photograph: Getty

Business activity in the service sector, which accounts for about 70 per cent of the Irish conomy, expanded at the slowest rate in more than seven years in October amid Brexit uncertainty.

The latest AIB services purchasing managers’ index (PMI) showed that the business activity index for the sector, which includes everything from hotels and hairdressers to IT firms and telecoms, fell to 50.6 last month, down sharply from 53.1 in September, to hit its lowest level since August 2012.

“The impact of ongoing Brexit uncertainty was evident, with some firms saying it has caused a fall in customer orders, and with reports it is weighing on business sentiment,” said AIB chief economist Oliver Mangan.

“In terms of the four sectors covered in the survey, two recorded declining activity in October – business services and transport/tourism/leisure – while a third, tech/media/telecoms, experienced growth slow to its weakest pace in seven years,” he said, noting only financial services firms reported continuing strong growth.

“Overall, the slowdown evident in manufacturing this year would now appear to have spread to the services sector,” said Mr Mangan. The data point to an appreciable deceleration in the pace of activity in the Irish economy in recent months as it is buffeted by uncertainty over Brexit and weakening global growth,” he added.

Other components of the bank’s monthly survey were, however, more positive. New export orders returned to growth in October. Though modest, the rate of expansion was the fastest since June with firms highlighting greater customer orders from Australia, New Zealand and the Netherlands. Some panellists also noted an increase in UK orders ahead of the Brexit deadline.

Employment growth also quickened in October as panellists raised staffing levels to cope with greater workloads. The rate of job creation was marked and the fastest in four months.