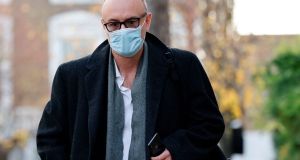 Dominic Cummings, one of British prime minister Boris Johnson’s most powerful advisers, will leave his position at the heart of Downing Street when Brexit is done at year-end, after an internal battle over who should be Mr Johnson’s chief of staff.

Mr Cummings, who masterminded the 2016 Brexit referendum vote and Mr Johnson’s 2019 landslide election bid, told the BBC that his position had not changed since January when he said he wanted to be largely redundant by the end of this year.

Transport secretary Grant Shapps told Sky that Mr Cummings had planned not to stay in his position as Johnson’s senior adviser for much more than a year, once Britain left informal membership of the European Union.

“As he wrote right at the beginning of the year in his own words, he planned to make himself largely redundant this year with the big thing that he’d worked on, of course, which was Brexit coming to an end at the end of the transition period which is December 31st,” Mr Shapps said.

The exit of one of Mr Johnson’s closest allies marks one of the most significant changes to the prime minister’s inner circle to date: Mr Cummings was cast by some as mr Johnson’s “brain” - a figure who wielded significant influence.

A committed Brexiteer who scorned the British political establishment and hurled barbs at reporters and cabinet ministers alike, Mr Cummings was cast in the Spitting Image satirical puppet show as an alien who repeatedly threatened Johnson with resignation - and sometimes asked to eat his child.

Mr Cummings, alongside fellow campaigner Matthew Elliott, drove Vote Leave to victory in the 2016 referendum. He is credited with coining the phrase: Take back control.

Behind his bluster, Mr Cummings believes the elites of the West - and the United Kingdom in particular - are out of touch with voters and have consistently failed their people while bailing out big business.

Mr Cummings is seen by allies and enemies as a ruthless strategist who cares little for the conventions of traditional British politics. Known as "Dom” to his friends, who regard him as a visionary, he was described by former prime minister David Cameron as a “career psychopath.”

He scorns the accepted Westminster dress code of a suit and tie, wearing jeans and t-shirts in Downing Street, often accompanied by an ill-fitting woollen hat. Many Conservative lawmakers dislike his style.

But Mr Cummings helped Mr Johnson navigate the maze of Brexit and provoked parliament into opposing Brexit, setting the scene for Mr Johnson’s victory in the 2019 election - the biggest majority his party has achieved since Margaret Thatcher’s 1987 election victory.

Mr Cummings also likes to scold reporters. In 2019, he told Reuters to stop asking about Brexit: “You guys should get outside London and go to talk to people who are not rich remainers.”

His disregard for accepted norms, though, was shown when he said he had done nothing wrong by driving 250 miles from London to obtain childcare when Britons were being told to stay at home to fight Covid-19.

As Mr Johnson negotiates the final stages of a Brexit trade deal and grapples with a second wave of the novel coronavirus outbreak, Downing Street has been gripped by an internal battle over who should become Mr Johnson’s chief of staff.

Mr Johnson’s director of communications, Lee Cain, resigned on Wednesday. Cain, another Brexit supporter, was a close ally of Cummings and worked with him at the Vote Leave campaign.–Reuters