In Dublin, Ryanair closes near all-time high amid talk of another share buyback 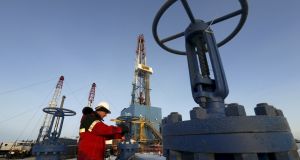 European stocks fell as turbulence in oil markets, and the prospect of tough talks at a meeting of G7 leaders met in Italy, undermined risk appetite. Britain’s pound tumbled to a more than four-week low of $1.2772.

The first opinion poll since a suicide bombing killed 22 people in Manchester indicated Britain’s opposition Labour Party had cut the Conservative Party’s lead to five points, with less than a fortnight to go to the parliamentary election.

Prime minister Theresa May has said a big win would strengthen her hand in Brexit negotiations.

The Iseq was largely flat, finishing the day at 6,973, with traders reporting low volume trading ahead of a bank holiday in the UK on Monday.

The big mover, however, was Ryanair, which closed up 1.7 per cent at €17.93 having hit a record high earlier in the session amid speculation the airline was planning another share buyback. The company also has results out next week. Food giant Glanbia was up nearly 1 per cent at €17.95 after the group’s largest shareholder Glanbia co-op placed a significant portion of its shares on the market to pay for a majority stake in Glanbia’s soon-to-be spun out dairy business.

Bank of Ireland traded down 0.8 per cent at 24.8 cents while rival Permanent TSB was up by a similar margin at €2.83.

Property investment vehicles Green Reit and Hibernia Reit both traded up by 0.7 per cent and 0.2 per cent at €1.42 and €1.36 respectively.

London’s premier index pushed to a record high and the pound sunk after a shock poll showed the Conservatives’ lead was slipping ahead of the general election.

The FTSE 100 Index hit a mid-session record of 7,554.21, before rising 29.92 points to close at an all-time high of 7,547.63. On the FTSE 250, the Restaurant Group raced ahead after it said full-year pre-tax profits would be in line with expectations. Shares were up 33.2p to 350.6p despite the struggling owner of Frankie & Benny’s enduring another period of tough trading, with like-for-like sales dropping 1.8 per cent in the 20 weeks to May 21st.

The pan-European STOXX 600 index closed 0.2 per cent lower as did the euro zone blue chips. Banks were the biggest drag, falling 0.6 per cent and hitting a one-week low earlier in the session. Traders cited worries over the political situation in Italy and concerns surrounding ailing regional banks Popolare di Vicenza and Veneto Banca, even though the country’s economy minister sought to reassure investors on Thursday that they will not be hit in any rescue of the two banks.

In the sector, Italian banks Intesa Sanpaolo, Mediobanca and UniCredit reduced losses after earlier falls, while Germany’s Deutsche Bank was among the biggest fallers.

US stocks were little changed in late morning trading on Friday, following six straight days of gains, as investors took a breather ahead of a three-day holiday weekend.

Consumer stocks had another strong day, however, with the consumer staples index rising 0.23 per cent and topping the list of gainers. Shares of Costco Wholesale rose 1.9 per cent to $178.09 and was among the biggest drivers of the S&P, after the warehouse club operator reported a strong profit. Ulta Beauty jumped 3.3 per cent, the most on the S&P, after the company raised its full-year forecast. Deckers Outdoor Corp rose as much as 21 per cent to a nine-month high after reporting a surprise quarterly profit. Among the laggards, GameStop fell 6.7 per cent to $22.02 as the videogame retailer left its full-year earnings forecast unchanged despite beating profit estimates.

Additional reporting by Reuters and Bloomberg

1 High Court appoints interim examiner to Compu b parent company
2 System agreed for Irish goods to skip checks on UK trade
3 Second Covid-19 outbreak and no-deal Brexit an appalling vista
4 Ireland faces 'deep downturn' this year and may not rebound until 2024 if there is a second wave
5 David McCullagh announced as co-host of RTÉ Six One News
6 How much do Irish people earn? And what will Covid-19 do to our wages?
7 Red tape logjam creates fear for Irish timber supply
8 Why are markets booming when a crash is on the way?
9 Supreme Court in Dublin clears Bernie Madoff Ponzi loss case for hearing
10 Former Worldspreads chief Conor Foley faces €730,000 fine
Real news has value SUBSCRIBE