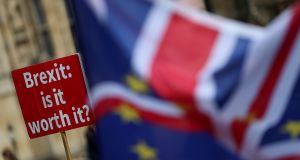 A demonstrator holds a sign that reads “Brexit. Is it worth it?” whilst draped in European Union (EU) and Union flags, as he protests outside the Houses of Parliament London. Bank of England governor Mark Carney and chancellor Philip Hammond warned ministers yesterday of the potentially massive cost of a no deal Brexit. Photograph: Daniel Leal-Olivas/AFP/Getty Images

Bank of England governor Mark Carney has delivered a “chilling” warning to Theresa May’s cabinet that a no-deal Brexit could lead to economic chaos, including a property crash that could see house prices fall by a third.

Mr Carney told ministers that in the scenario of a disorderly Brexit, the bank would not be able to avert a crisis by cutting interest rates – as it did after the 2016 referendum vote – and that inflation and unemployment would rise.

However, he boosted Mrs May’s position when he said that if she struck a Brexit deal based on her much-criticised Chequers exit plan presented to Brussels in July, the economy would outperform current forecasts, because it would be better than the bank’s assumed outcome.

His domesday outlook came as ratings agency Moody’s said the Republic is one of three of European countries expected to suffer most from a no-deal Brexit.

The State could “bear a loss in output commensurate with that of the UK”, said Moody’s, which added that the risk of a no-deal Brexit has “risen materially” in recent months

In London. cabinet ministers listened in silence as the Bank of England governor gave his detailed assessment of the risks of an ill-tempered no-deal exit, saying that the bank assumed that Britain would see net emigration for the first time since 1994.

Mrs May had intended her three-and-a-half hour cabinet meeting to review no-deal contingency plans and to send a signal to the EU that Britain was prepared for the prospect of Brexit talks failing.

Instead, Mr Carney and Philip Hammond, chancellor, joined forces to deliver a blow-by-blow account of why such a scenario would be economically damaging and that there would be little the bank or treasury could do about it.

One observer of the meeting in Downing Street said: “All of the predictions were grim and the numbers were chilling. Carney was listened to respectfully. He took a few questions afterwards, but none of them were hostile.”

The BoE has already forced UK banks to run a stress test on the same “severe, but plausible scenario” of the damaging economic effects of a disorderly Brexit.

But many Tory Eurosceptic MPs will ridicule the governor’s warnings, arguing that both the bank and treasury have miscalculated the economic consequences of Brexit in the past.

Jacob Rees-Mogg, leader of the Eurosceptic European Research Group, last month called Mr Carney, who this week agreed to stay in post through Brexit until January 2020, “the high priest of Project Fear”.

Among Mr Carney’s most stunning warnings was that house prices would be 35 per cent lower than would otherwise be the case three years after a disruptive no-deal Brexit – which would assume a breakdown in trading relations with the EU.

The property crash would be driven by rising unemployment, depressed economic growth, higher inflation and higher interest rates, warned Mr Carney, who is in Dublin today to deliver an address in the Central Bank. – Copyright The Financial Times Limited 2018