Organisation has struggled for relevance under Trump attacks 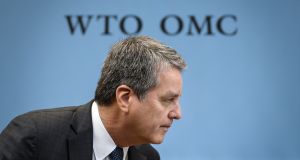 The head of the World Trade Organisation is stepping down early from his post, opening a vacancy at an institution that is grappling with global trade tensions and a collapse in commerce during the Covid-19 pandemic.

Roberto Azevedo, a former Brazilian diplomat who has held the director general post since 2013, will tell WTO ambassadors this afternoon that he will end his term of office in September, a year before it expires. The story, originally reported by Bloomberg, was confirmed by Geneva trade officials.

The WTO has struggled to maintain its relevance after consistently being attacked by Donald Trump’s administration, which has strongly criticised its over-reach and blamed it for allowing China to practise unfair trade. The appellate body, the highest authority in the organisation’s dispute settlement process, ceased to function late last year after the US blocked the appointment of new judges to replace two who retired.

Under Mr Azevedo, the organisation has deliberately kept a low profile during the coronavirus pandemic, staying largely silent over the global rash of export restrictions on medical equipment.

The process of appointing his replacement could stretch into next year if the WTO appoints an acting director-general from one of its existing senior staff, but the timing of the resignation will hand the Trump administration a considerable amount of power over the nomination.

Simon Evenett, international trade professor at the University of St Gallen in Switzerland, said that Mr Azevedo’s departure showed the limitations of a low-key technocratic approach to trying to revive the WTO, which has not concluded a major global trade agreement since its creation in 1995. – Copyright The Financial Times Limited 2020