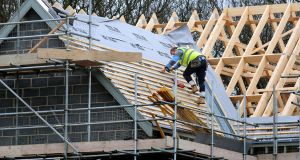 The European Commission says Ireland’s “housing affordability is a problem for many households, and inflation in the rental sector is persistently high”. Photograph: PA Wire

The Republic should invest in greening its economy and tackle long-term structural problems in health, housing and inequality to fuel its recovery from the economic slump caused by the Covid pandemic which is expected to be the worst in a century, the European Commission has said.

“We are facing a shock without precedent since the Great Depression. Its economic and social consequences pose policy challenges unlike any we have seen in our lifetimes,” said European commissioner for the economy Paolo Gentiloni. “At the same time the sustainability and competitiveness challenges we faced before the crisis have not gone away...So, as we look to the future, our investment and reform objectives must remain focused on making a success of the green and digital transitions.”

He spoke as the EU’s executive body unveiled its periodic advice to member states on how to reform their economies to address structural problems, work towards carbon neutrality, and increase economic growth.

The impact of the pandemic is forecast to be severe, increasing unemployment to 7.4 per cent this year, and requiring government expenditure that will mean a large deficit that will raise Ireland’s ratio of debt-to-GDP to 69.1 per cent, according to the 2020 Stability Programme.

The commission warned there was a risk the pandemic could worsen inequality between different regions of the State, and advised that investment would be needed to counter this.

It comes a week before the EU is due to set out a proposal for a recovery fund for the bloc to counter the effects of the pandemic. That is expected to amount to over a trillion euro in a mix of loans and grants to member states.

It will be tied to the EU’s seven-year budget, which the commission proposes to use to fund a continent-wide transition to a green and digitalised economy, and towards its aim of carbon neutrality in the bloc by 2050. Mr Gentiloni said that, in contrast to the response to the financial crisis of the last decade, greater spending would be needed to reach these goals.

“It will be vital to avoid making the mistakes of the past. In the fiscal consolidation of 10 years ago, investment was the first victim. To repeat this approach would be to sacrifice our long-term priorities. “In a nutshell, we need a well-funded recovery plan. We will present it next week.”

“Before the Covid-19 pandemic, hospitals were already working near full capacity, with the occupancy rate for acute care beds among the highest in OECD countries,” the commission’s report writes. “This was mainly due to the lack of universal access to primary care and a significant reliance on hospital care.”

“In the medium term, Ireland still needs to address the structural limited efficiency, flexibility, resilience and accessibility of its healthcare system,” the report writes. It notes that there is a plan for this under the Sláintecare programme, but that “plans for its implementation remain vague”.

While housebuilding has increased, the commission notes it still lags demand, and that 68,700 households were on waiting lists for social housing at the end of last year. “Housing affordability is a problem for many households, and inflation in the rental sector is persistently high. Improved infrastructure, combined with spatial planning, could be a critical enabler for improving housing supply.”

The commission said Ireland is set to miss its 2020 targets for renewable energy and energy efficiency, is highly dependent on energy imports, and has among the highest electricity costs in the EU.

“Ireland has lagged behind so far in tackling decarbonisation. Greenhouse gas emissions in transport and buildings are high and have remained on a rising trend. Ireland will fall short of the 2020 energy efficiency and renewable energy targets.

The report describes the Government’s Climate Action Plan as “credible” but requiring “effective and sustained implementation”.

Improving broadband infrastructure is essential to increase the competitiveness of small businesses, the commission advises. “Ultra-fast broadband is only available to 5 per cent of rural premises, well below the EU average of 29 per cent, and Ireland is also one of the EU’s most expensive countries for fixed broadband.”

Supports for research and development tend to go to international companies rather than home-grown talent, according to the commission.

“Although Ireland provides a relatively high amount of public support to companies, this support is implemented through a tax credit scheme for research and development, which tends to favour larger, foreign-owned firms and has a limited effect on improving the productivity of local Irish firms.”

The commission says while Ireland has taken steps to tackle aggressive tax planning, there are signs that multinationals are still using the State to reduce their international tax burdens.

“The high level of royalty and dividend payments as a percentage of GDP suggests that Ireland’s tax rules are used by companies that engage in aggressive tax planning.”

It recommends that Ireland should broaden its tax base, noting that 45 per cent of corporate taxes are collected from just 10 companies, leaving the State highly vulnerable to “economic fluctuations and idiosyncratic shocks”.

It warns that Ireland is at high risk of being used for money-laundering due to its internationally-focused economy, and says that supervision of the issue is “inadequate”.

It found the government should invest in increasing the skills of its workforce to enable people to shift to the changing needs of the labour market and prepare for the transition to a green economy.

“The challenges facing Ireland in regard to poverty and employment quality and support, including for people with disabilities, remain, and they are likely to be exacerbated by the pandemic.”