Concerns remain about the proposed arrangements as sterling swings dramatically 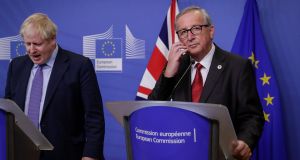 Business groups have given a cautious welcome to the new Brexit deal agreed between the UK and the EU on Thursday, but remain concerned about the proposed arrangements, which most described as complex.

The muted response came as sterling swung dramatically throughout the day, and stock markets edged mostly lower on the back of growing concerns over Boris Johnson’s chances of getting the new proposals through parliament this weekend.

Employers’ group Ibec said it was “encouraged” by the new withdrawal deal, which if ratified, would avoid a damaging no-deal Brexit cliff edge.

However, it said given the complexity of the new arrangements, it needed more time to examine the proposals in detail.

At a Brexit conference in Dublin, Angela McGowan, director of the Confederation of British Industry (CBI) in Northern Ireland, and several other speakers, highlighted the problematic nature of the proposed arrangements for the North, which would leave businesses having to claim back tariff differentials depending on whether incoming goods were sold in the UK or sold on into the EU.

In general, business leaders in the North said the prospect of any deal was a welcome breakthrough, but there was also an air of wariness about what the arrangements might actually mean on the ground.

Manufacturing NI gave the proposals a “guarded welcome”, while the Northern Ireland Chamber of Commerce and Industry said the business community had “always been clear” that a Brexit deal was critical.

Stock market investors struggled with their response, with European shares mostly tracking lower as optimism over the deal dissipated. The Iseq fell by 0.85 per cent, with banks giving back gains notched up in previous days.

One dealer pointed to the effect of continuing uncertainty over the proposed deal successfully making its way through the British parliament this weekend.

“A lot of these shares have shot up the past week or two on positive noise around Brexit. They are priced for good news. Any bit of a wobble on Brexit will affect them,” he said.

Sterling seesawed, nearing $1.30 against the dollar when news of the deal emerged, but dropping as low as $1.276 as the day progressed. Against the euro, it traded between 87.03p and 85.76p, settling around 86.42p later in the evening.

Gearóid Keegan of Investec Treasury noted that because the key UK vote will take place on Saturday, when currency markets are not trading, there is a “distinct possibility” that sterling could open either significantly higher or significantly lower on Monday morning.

“For businesses with sterling exposure operating on tight margins concerned about currency movements that could impact on profitability, consideration should be given to hedging a position before the weekend,” Mr Keegan said.