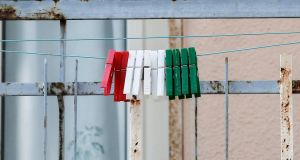 If we think Italy first, France first, Germany first and so on, Europe will finish last. We are economically too dependent on each other to tackle this crisis individually. Photograph: Fabio Frustaci

While European leaders have converged on a response to the public health crisis – including a pledge to revamp the EU crisis management system, funding for vaccine research and joint procurement of medical kits – countries remain divided over how to help save its economy.

But this is not a time for division, it is a time for solidarity. There is not a moment to waste with finger pointing and the silent destruction from procrastination. Let us be clear: the European Union itself it at stake and, with it, its promise of peace, prosperity and solidarity to all EU citizens.

We need to act now to save its economy. I am writing this not just as president of the European Investment Bank, the project financing arm of the European Union, but as someone with over 30 years of engagement in European politics.

The gravity of the economic shock is breathtaking: according to the German IFO institute, depending on the scenario, the European economy will shrink by between 7 and 20 per cent.

Behind the numbers are real consequences: financial markets expect that one in three companies will not make it through the coming years. Spain lost nearly one million jobs in under three weeks. This is as many as were lost during the worst 100 days of the Great Recession in 2008-2009.

In Europe, the response to the economic fallout has so far been largely and increasingly national. The European Commission has temporarily suspended euro zone rules on government debt, allowing member states to spend what they need to survive the outbreak as best as they can.

The European Central Bank announced a €750 billion rescue package, declaring there were no limits to its commitment to safeguard the euro, but acknowledging that by itself, this would not be enough.

Share your story: Have you lost your job or business?

If we think Italy first, France first, Germany first and so on, Europe will finish last. We are economically too dependent on each other to tackle this crisis individually. You need 30,000 parts to build a car but only one not to build it.

Even if we manage to muddle through the economic crisis one by one, without a common European response, the EU will become considerably more unequal.

Germany’s support to the real economy is twice that of Italy’s, France’s and Spain’s as a share of gross domestic product. The vastly different measures taken by member states mean the economic divergence that we have already observed prior to the crisis will only get worse – making it eventually impossible to sustain our common market.

The political costs of doing too little too late add to the emergency. Widespread social unrest can cause damage at unimaginable levels, and countries with thinner safety nets are facing tougher challenges. Anger spreads faster than the virus.

A poll conducted in mid-March found that 88 per cent of Italians felt Europe was failing to support Italy, while 67 per cent saw EU membership as a disadvantage – a remarkable result for a founding member state, where the EU once basked in high levels of support. If European division prevails, there will be lasting memories of a time when not the EU but China and Russia rushed to Italy’s aid.

Second, we need a financial backstop for companies, particularly SMEs to weather the lockdown. And third, we need support for employment protection schemes so that a minimum number of jobs are lost.

Beyond that, we need to start working on a joint economic recovery plan. Many sectors will not return to pre-crisis production levels for many years. The loss of disposable income will also reduce consumption.

We need to start planning for this time. In addition, we cannot afford to let Europe fall further behind in innovation, technology and competitiveness, and we must ensure that our best companies, and their know-how, stay in the continent.

I welcome the European Commission proposal to set up a dedicated instrument for temporary support to mitigate unemployment risks in an emergency. And the European Stability Mechanism can serve as an important instrument to address the Covid-19 economic shock.

At the European Investment Bank, we have put forward a proposal for a €25 billion pan-European guarantee fund that could support hundreds of billions of financing for European businesses that are viable but suffer liquidity constraints as a result of the coronavirus.

Former Belgian prime minister and EU founding father Paul-Henri Spaak once said: “Europe consists only of small countries – some of which know it and some of which don’t yet.” We have weathered euro-zone bailouts, the migration crisis and Brexit. In all of these moments, we have found truth in his words that together we were stronger. Let us remember this also for the fight against the coronavirus and deliver a bold European response, so that the Europe of tomorrow is the Europe that we have built together.