Revenue has calculated yield of third tax rate on those earning €80,000 and more 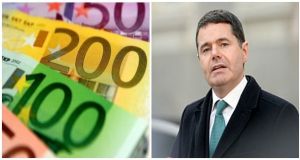 In a document prepared in advance of October’s budget, to be delivered by Paschal Donohoe, Revenue outlines estimates on how many people will pay tax, and at what rates, come January.

The Government could raise €433 million by introducing a 43 per cent income tax rate for workers earning more than €80,000 a year, an analysis by the Revenue Commissioners states.

In a document prepared in advance of October’s budget, Revenue outlines estimates on how many people will pay tax, and at what rates, come January.

Introducing a 43 per cent rate could bring the top tax rate levied on PAYE workers into line with that paid by the self-employed, who currently pay a three-percentage-point universal social charge surcharge on incomes of €100,000 and more.

However, it could also be introduced at the same time as the existing top rate of tax, at 40 per cent, is cut.

According to Revenue figures, cutting the existing top rate of tax to 39 per cent would cost €348 million in a full year. Switching the burden from middle-income to higher-income earners could be viewed as politically palatable.

Last year, the phased withdrawal of the €1,650 PAYE tax credit from higher earners was mooted, while there have been frequent criticisms of the tax burden on middle-income earners as a result of the low-level earnings at which people start paying tax at 40 per cent – above €34,550 for a single person and €43,550 for a couple – when compared with other developed countries.

The Revenue projections follow a submission to the Tax Strategy Group from the Department of Employment Affairs and Social Welfare, which put forward the prospect of increasing the rate of social insurance, PRSI, by half a percentage point.

Other figures published by Revenue show that, even with no changes, 65,000 taxpayers would find themselves paying income tax at the higher 40 per cent rate from January unless income tax thresholds are increased in the budget.

A further 57,600 workers would find themselves falling into the tax net at the lower 20 per cent rate, as rising pay brings their income above the threshold.

1 Getting out from under ‘never-ending’ Celtic Tiger debt burden
2 Brittany Ferries ends Cork-Santander route
3 Pensions: Estonia plans to unleash a potential €4.85bn on economy
4 Explainer: what is the row about SF’s multinational tax plan?
5 Banks withdrawing from ATMs – another failure of regulation
6 Brittany Ferries announces new services to Spain and France from Rosslare
7 Fair Deal nursing homecare leaves little for bills and gifts
8 Coronavirus shuts down Starbucks, Toyota and BA
9 Britain after Brexit will not be alone, but it will be lonelier
10 More affordable iPhone 11 is unlikely star of Apple earnings
Real news has value SUBSCRIBE