Can Ireland really afford to cut taxes in Budget 2019?

Cliff Taylor: Promised extra spending will take up most of our room for manoeuvre 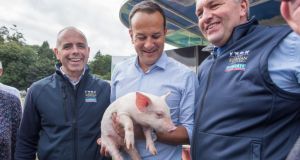 At the Virginia Show in Co Cavan, Taoiseach Leo Varadkar mentioned the need to increase investment and spending on key public services and a tax and welfare package which ‘puts a little bit of money into everyone’s pocket’.

There’s the politics of the budget – and then there’s the reality. You can’t blame the Government for trying to sell the budget sizzle. The political imperative is to try to keep everyone happy and so, as well as significant increases in spending, the tax package will be “bigged up”, particularly in relation to that ill-defined group – the middle earners. But with huge demands on the public purse in areas such as health and housing, the scope for an actual reduction in the tax burden is limited.

Government spending is now heading sharply upwards and is already set to increase by not far off 4 per cent next year, before any budget welfare measures are counted in. Extra spending already committed for 2019 will take up €2.6 billion of the €3.4 billion room for manoeuvre estimated in the pre-budget sums. The die is already cast.

So the only way to afford a tax package of any size will be to raise additional funds. Now you could argue that savings could also be found in other spending programmes, which amount to €55 billion in voted day-to-day spending, as an alternative route to create additional room for manoeuvre. But experience suggests this won’t happen. Irish budgets are incremental affairs and all the focus in recent years has been on “restoration” of the pre-crisis position, rather than reform.

The only way to meet the budget targets will be for the overall amount of tax collected to increase at roughly the same pace as spending. Economic growth will take care of some of this, but the Government still has limited room for significant changes. This is particularly the case now, as Brexit uncertainty looms.

Taoiseach Leo Varadkar said during the week: “If we are heading into any economic turmoil in the years ahead because of Brexit or anything else, the best way to prepare is to make sure our public finances are in order.” Moving the public finances into surplus next year would be one way to do this.

The Taoiseach, speaking at the Virginia Show this week, did set the priorities out clearly enough. After the stability of the public finances, he mentioned the need to increase investment and spending on key public services and a tax and welfare package which “puts a little bit of money into everyone’s pocket”.

The question is whether money will go into one pocket and out of another. Some taxes may rise and some may fall, but the overall tax burden will not change much. Last year, Minister for Finance Paschal Donohoe managed to find extra cash from a rise in commercial stamp duty, thus funding some cuts in income tax. This year consumers may be hit more directly by new revenue raising.

Budget measures may include hiking the 9 per cent VAT rate levied on the tourist and hospitality sectors – which would knock on in part to higher prices to consumers, along with other measures which will have a direct impact on our pockets, such as increased carbon taxes on fuel. Tobacco will, no doubt, take another hit. Hiking taxes elsewhere to pay for cuts in income tax is generally a good idea in economic terms, though a caveat is that indirect tax increases tend to hit the less well off most.

A fuss will be made of it all, but the real political game is now all about spending

Moving the local property tax (LPT) up gradually in the years ahead to help fund cuts in income tax would be one option, though the political dangers of this may well scare the Government off. Any changes in the LPT will not kick in until 2020, but as the current valuation period runs out at the end of next year, the Minister will have to lay out his intentions.

There will be income tax changes and they will, as the Taoiseach reiterated this week, be aimed at middle-income earners. An increase in the €34,500 earnings level at which people enter the top 40 per cent income tax rate has been well flagged, for example. One of the key problems in our income tax system is the high tax burden on middle-income earners, though it costs a lot to change this, so don’t expect too much.

And there is another point here which is often lost in the scramble. Wages are rising again and on average will probably increase by more than 3 per cent next year. Unless it adjusts the income tax system to take account of this, the Government’s coffers benefit as more people are pushed into the higher tax band and tax credits are worth a bit less in real terms. It is the ultimate stealth tax increase.

So, for example, the Government would have to increase the standard-rate income tax band – the entry point to the higher rate – by just over €1,000 to account for expected wage inflation. This is probably the kind of increase it will actually announce – but it will present this as a tax cut. In an analysis of the budget for this year, the ESRI calculated that it would have cost €1.1 billion to fully index the tax and welfare systems for wage inflation, a bit short of what the Government actually spent.

So tax cuts this year, too, may not leave us feeling too much better off. A fuss will be made of it all, but the real political game is now all about spending. The Government is under constant pressure on health – and still has to decide how to fund Sláintecare. And I suspect that the Government and State agencies are going to be pulled further into tackling the housing crisis directly, rather than trying to incentivise the private sector to build. To afford all this, the tax burden is going to stay just about where it is.

1 The five ‘hidden’ reasons that stopped me losing weight
2 No obvious signs of injury on remains of McGinley children
3 Why our love for Leo is withering on the vine
4 Dancing with the Stars: Glenda Gilson sinks like Titanic
5 Snow expected as Met Éireann issues status yellow weather alert
Real news has value SUBSCRIBE