Economic impact for us after Brexit will be ‘severe’, warns report 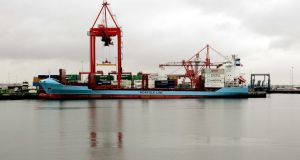 Brexit could cost us significantly in the years ahead. This conclusion from a joint paper by the Department of Finance and the ESRI, published on Monday, comes as no surprise. However the research provides a valuable first estimate of the potential long-term impact of Brexit on growth, jobs and the government finances.

By its nature, and with the terms on which Brexit will happen so uncertain, this is inevitably difficult territory. But its conclusion is sobering. Looking at the period after Britain leaves the EU, it says the economic impact will be “severe”.

This is mainly due to the hit to our exports, affected by lower growth in Britain and internationally. In the harder Brexit scenarios, trade will also be hit by the imposition of tariffs, special taxes on imports which apply on goods traded between Britain and the EU. This will mean Irish goods cost more to UK consumers and visa versa, though of course currency swings will be a factor here too.

Average tariffs might be low enough, perhaps 3 to 4 per cent, assuming they are at a similar levels to those that apply under World Trade Organisation rules – and the paper does not speculate on exact tariff levels.

But much higher tariffs – up to 20 -30 per cent of the value of the product – typically apply in areas such as beef, dairy and some other food products. This would hit indigenous food exporters hard and could provide highly disruptive for cross-border trade.

The figures show the cost of Brexit to Ireland will be significant, possibly in some areas even worse than in Britain itself. What the paper does is look at the likely position after Brexit actually happens – this could be in March 2019, if Britain triggers article 50 talks next March and these go on for the full two years allowed.

There will be an economic impact in the meantime – of course. The Department of Finance has already said it expected growth to be 0.5 of a point lower in 2017, coming in at 3 per cent rather than 3.5 per cent.

However the new research covers the period after Britain actually leaves. It is based on a major pieces of research by Britain’s National Institute for Economic and Social Research, which looked at the impact of Brexit on Britain and the world. It then runs these conclusions through the ESRI’s new model of the Irish economy, and assumes that tariffs and other trade restrictions would apply immediately on Britain’s exit.

It suggests that five years later the level of Irish GDP would be 3.5 per cent lower under a “ hard Brexit” scenario than would otherwise be the case, rising to close to 4 per cent lower after 10 years. What this means is that annual economic growth would be one percentage point lower than it would otherwise have been in the first couple of years after Brexit actually happens, with lesser losses in subsequent years.

This is on the basis that the Government does not change policy in response; if it does, it could limit the impact, the Department of Finance says. Still, over the first five years, the economic cost could the region of €9 billion to €10 billion in terms of lost output.

This would leave the unemployment rate 2 points higher than otherwise and mean that the government deficit would be about 1 per cent higher each year than it would otherwise be. In a decade this would add more than 10 points to the debt to GDP ratio.

These figures assume a hard Brexit – one in which Britain leaves the single market and the customs union. A less harsh Brexit, would, predictably, have a lower cost.

In the cast of a hard Brexit, the cost would be 3.8 per cent of GDP in terms of lost output to Ireland in the decade after Britain leaves, with most of the hit in the first five years. In the most favourable scenario, with Britain remaining in the European Economic Area – like Norway – the cost would be 2.3 per cent of Irish GDP over a decade. A third, middle course, with a quick trade deal between the EU and Britain avoiding the worst impact of tariffs, would involve a hit of 2.7 per cent over 10 years. In all cases, most of the losses occur in the first five years.

The main hit to Ireland is via trade – lower export growth and additional costs from tariffs for companies importing inputs from Britain. This research is the first to encompass all the possible routes of economic impact on Ireland, including the hit to Brexit on our other trading partners.

The department is not updating its own forecasts for the actual projected rate of economic growth for the years ahead just yet. But it has been anticipating growth of 3 per cent plus per annum. If the latest estimates are correct, this would cut growth after 2019 – assuming Brexit happens then – to closer to 2 per cent for a period. There will also be some impact in the interim, before Brexit happens, from factors such as sterling weakness.

Brexit may mean banks heading from London to Dublin and other new foreign investment for Ireland, but the conclusions of the research are clear. The overall impact is significantly negative. Brexit will be bad for our pockets.