To achieve what is needed at home, states also have to co-operate – always a hard task 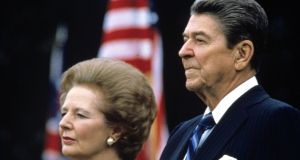 Ronald Reagan and Margaret Thatcher: the connection between them secured the return of the ideal of the free market. Photograph: Sipa Press/REX Shutterstock

It was a love affair – platonic, but a love affair, all the same. As a former US diplomat put it, President Ronald Reagan and Margaret Thatcher were “political and philosophical soulmates”. The connection between Reagan and Thatcher secured the return of the ideal of the free market. Both aimed at rolling back what they thought an overintrusive and incompetent state. Their marriage of ideas did not just reshape the politics and policies of their countries. It reshaped those of the world. But it did not do so on its own.

Fast forward to today. In his inaugural address in January, Donald Trump spoke not of Reagan’s “shining ‘city on a hill’”, but of “American carnage”. This was more than a change of mood. The leaders of the Republican party had long sought the votes they needed for their primary goals of tax cuts, spending cuts and economic deregulation by appealing to cultural, religious and ethnic anxieties. Mr Trump spoke directly to the angry and anxious, by promising to defend social security and Medicare, embrace protectionism and curb immigration. He said: “Protection will lead to great prosperity and strength.” This was neither traditional conservatism nor Reaganism. It was right-wing populism.

Theresa May repudiates Thatcherism still more explicitly than Mr Trump rejected Reaganism. Her Conservative election manifesto states: “We must reject the ideological templates provided by the socialist left and the libertarian right and instead embrace the mainstream view that recognises the good that government can do.”

Confidence in the benefits of free markets, free trade and free movement of people has been lost in both countries. Conservative thinking has become more tribal, less global. The devastation caused by the financial crisis of 2007-09 is one explanation. Hostility to immigration is another. Without the latter, Hillary Clinton would probably be president of the US and David Cameron would be prime minister of the UK.

Not only are the US and the UK in different ideological places, but no large country promotes the optimistic and outward-looking faith in free markets of the Reagan and Thatcher era. The US and UK have moved into a period marked by suspicion of foreigners and doubts about free markets, particularly if foreigners are involved in any way.

As fundamental is asking whether the policies being promoted will assuage the anxiety of those who brought Mr Trump and Mrs May to power (if indirectly, in the latter’s case). Alas the opposite is far more likely. Both seem to like the idea of tinkering in markets on a discretionary basis. No reason exists to expect such interventions in the market to achieve much. In Mr Trump’s case, the proposed slashing of federal spending on areas essential to the disadvantaged, to the quality of essential public services and to the provision of public goods is likely to be highly damaging to the welfare of many of his supporters. Meanwhile, nothing he does will bring back lost manufacturing and mining jobs. This failure seems sure to make the base angrier. Meanwhile, the painful reality of Brexit will overwhelm Mrs May’s new Conservative agenda even if it could be made to work in its own terms, which is unlikely.

Yet the changes in American and British conservatism are also significant. What they are saying is that a transformation in policy and politics is demanded. Big errors were made, not least in letting the financial sector become so dominant. The evidence also demonstrates inequality is a choice, not a destiny.

It is a legitimate criticism of the Reagan and Thatcher revolutions that they underestimated the enduring functions of states as insurers, as protectors, as funders of education and health, as providers of infrastructure, as suppliers of public goods, as managers of externalities, as regulators of monopolies, as stabilisers of economies, as redistributors of incomes and not least as the focus of political loyalties. Moreover, to achieve what is needed at home, states also have to co-operate – always a hard task.

Getting all this right will be difficult. It would be a good thing if the British and Americans recognised that they do not possess all (perhaps even most) of the answers. One encouraging thing about Emmanuel Macron, the French president, is that he has noted this for his own country, pointing to the Scandinavian example of dynamic economies with high levels of social protection. If political traditions are to be renewed, it must be done by being open to ideas from others. The Anglo-Americans should dare to follow Mr Macron’s suit.