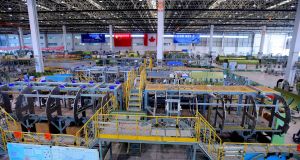 Moody’s Investors Service downgraded China’s credit ratings on Wednesday for the first time in nearly 30 years, saying it expects the financial strength of the economy will erode in coming years as growth slows and debt continues to rise.

The one-notch downgrade in long-term local and foreign currency issuer ratings, to A1 from Aa3, comes as the Chinese government grapples with the challenges of rising financial risks stemming from years of credit-fuelled stimulus.

“The downgrade reflects Moody’s expectation that China’s financial strength will erode somewhat over the coming years, with economy-wide debt continuing to rise as potential growth slows,” the rating agency said in a statement, changing its outlook for China to stable from negative.

China’s finance ministry said the downgrade, Moody’s first for the country since 1989, overestimated the risks to the economy and was based on “inappropriate methodology”.

“Moody’s views that China’s non-financial debt will rise rapidly and the government would continue to maintain growth via stimulus measures are exaggerating difficulties facing the Chinese economy, and underestimating the Chinese government’s ability to deepen supply-side structural reform and appropriately expand aggregate demand,” the ministry said in a statement.

China’s leaders have identified the containment of financial risks and asset bubbles as a top priority this year. All the same, authorities have moved cautiously to avoid knocking economic growth, gingerly raising short-term interest rates while tightening regulatory supervision.

At the same time, Beijing’s need to deliver on official growth targets is likely to make the economy increasingly reliant on stimulus, Moody’s said.

“While ongoing progress on reforms is likely to transform the economy and financial system over time, it is not likely to prevent a further material rise in economy-wide debt, and the consequent increase in contingent liabilities for the government,” Moody’s said.

While the downgrade is likely to modestly increase the cost of borrowing for the Chinese government and its state-owned enterprises (SOEs), it remains comfortably within the investment grade rating range.

China’s Shanghai Composite index fell more than 1 per cent in early trade before paring losses, while the yuan currency in the offshore market briefly dipped nearly 0.1 per cent against the US dollar after the news.

One trader at a foreign bank in Shanghai said the spread between benchmark government bonds and those issued by SOEs in US dollars widened by 2-3 basis points.

“It’s going to be quite negative in terms of sentiment, particularly at a time when China is looking to derisk the banking system, as well as at a time when there’s going to be some potential restructuring of SOEs,” said Vishnu Varathan, Asia head of economics and strategy at Mizuho Bank’s Treasury division.

In March 2016, Moody’s cut its outlook on China’s ratings to negative from stable, citing rising debt and uncertainty about authorities’ ability to carry out reforms.

Rival ratings agency Standard & Poor’s downgraded its outlook to negative in the same month. S&P’s AA- rating is one notch above both Moody’s and Fitch Ratings, leading to speculation among analysts that S&P could also downgrade soon.

Moody’s has Japan at the same A1 rating China is now on.

“We understand the risk and the reason for downgrade but due to China being a unique system on its own - closed capital account and strong government control over all important sectors - it can tolerate a higher debt level,” said Edmund Goh, a Kuala Lumpur-based investment manager at Aberdeen Asset Management.

More than two hours after the announcement from Moody’s, no Chinese state media had published news about the downgrade.

The slowing economy has become an increasingly sensitive topic in China, with authorities directing mainland Chinese economists and journalists towards more positive messaging.

Authorities have stepped up efforts over the last several months to curb debt and housing risks, and a raft of recent data has signalled a cooling in the economy, which grew a solid 6.9 per cent in the first quarter.

China’s potential economic growth was likely to slow towards 5 per cent in coming years, but the cooldown is likely to be gradual due to expected fiscal stimulus, Moody’s said.

Government-led stimulus has been a major driver of growth over recent years, but has also been accompanied by runaway credit growth and has created a mountain of debt - now standing at nearly 300 per cent of gross domestic product (GDP).

Julian Evans-Pritchard, China economist at Capital Economics in Singapore, said steps to resolve the debt overhang, such as debt-for-equity swaps at state-owned enterprises, were insufficient to deal with problem.

“As a result, it’s reached the point where the bad debt problem is just so large the government will have to step in to resolve it at some point and that obviously means at some point a sizeable increase in government debt,” he said.

Moody’s said it expects the government’s direct debt burden to rise gradually towards 40 per cent of GDP by 2018 “and closer to 45 per cent by the end of the decade”.

A growing number of economists believe that a massive bank bailout may be inevitable in China as bad loans mount.