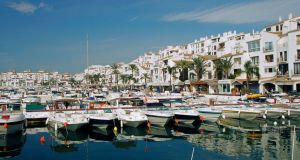 Britons bought about 2,175 homes in Spain in the first quarter, down from about 2,800 a year earlier, according to calculations based on data from the registry. Photograph: Getty Images

Colin Smith wanted to buy a home in sunny Spain – until Brexit made him think again.

The 40-year-old engineer from London had looked at properties along the Mediterranean coast, researching hot spots favored by British expats such as Alicante. Then the United Kingdom voted to quit the European Union, sparking an 11 per cent plunge in the pound against the euro and putting paid to his holiday home plans.

“I did a lot of research and visited various places to get a feel for where to buy,” he said. “Did Brexit make me reconsider? Yes, absolutely.”

Mr Smith isn’t alone in abandoning his Spanish house hunt. In the first quarter, the proportion of home purchases made by UK citizens in Spain fell to a record low. As well as uncertainty about the impact of the pound’s decline on their spending power, Britons are also worried about how Brexit talks might affect access to health care and even their right to reside in Spain.

Britons accounted for 14.5 per cent of purchases of Spanish homes by foreigners in the first quarter, according to Spain’s property registry. That’s the lowest proportion since the registry began compiling data in 2006.

In 2016, UK buyers made up 19 per cent of home purchases by non-Spaniards. That compares with 38 per cent in 2008 when British appetite for buying Spanish holiday homes was at its peak. Britons bought about 2,175 homes in Spain in the first quarter, down from about 2,800 a year earlier, according to calculations based on data from the registry.

“The Brexit effect is clearly having a notable impact on the buying behavior of UK buyers in Spain,” a report from the registry said. “Demand is clearly trending downwards.”

To be sure, citizens from the UK still make up the largest share of foreign home buyers in Spain ahead of France and Germany. Even so, real estate agents agree that the future remains uncertain and where sterling goes next is key.

Most British buyers expect the UK to hammer out a deal on residents’ rights and worry less about that than about what happens to sterling, said Mr Stucklin.

UK prime minister Theresa May heads into a general election next month seeking a mandate to negotiate the Brexit divorce. Although Ms May is expected to win the election with a large majority, the question remains whether she can negotiate a deal with the EU for the terms of Brexit or walk away without one.

As a result, uncertainty is likely to continue weighing on the pound, which could ultimately hurt consumers as price increases cap spending power.

“Volatility will remain and could even increase further after the elections as the negotiations with the EU begin,” said Richard Falkenhall, a strategist at SEB AB in Stockholm. “Slower growth and risks of a messy exit is likely to keep the sterling on a weak footing.”

For Smith, the decline in the pound means he can no longer afford the house he wanted to buy in Spain. “What I had my heart set on cost X before the vote and Y after it given the drop in the pound,” he said. “It turned from being a dream getaway to a loss-maker.”