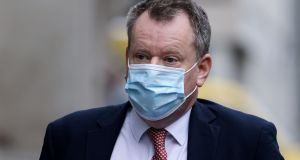 Significant differences remain between Britain and the European Union in talks to try to clinch a trade agreement, both sides have acknowledged as the last chance nears to avoid damaging tariffs coming into force on January 1st.

Little time remains to reach a deal and then to have it ratified by the British and EU parliaments and implemented by businesses, with billions of euro in trade and smooth relations between the EU and its former member riding on the outcome.

Both sides struck a gloomy note on Monday as the requirement to speak over video connection hampered the progress that could be made, in contrast to optimistic words from Taoiseach Micheál Martin who said he hoped a deal could be reached by the end of the week.

“Time is short. Fundamental divergences still remain, but we are continuing to work hard for a deal,” said the EU’s chief negotiator Michel Barnier, as he convened with his counterpart David Frost for online talks. A UK government spokesman said: “We continue to make progress but there are significant gaps in the most difficult areas that remain.”

Negotiations are taking place online this week because a senior EU negotiator tested positive for Covid-19, putting Mr Barnier and others into quarantine until at least Thursday. No date has yet been set for the resumption of talks in London.

Though some progress was made last week, the two sides remain divided over the most contentious issues of fishing rights, governance, and the level playing field, which refers to arrangements to ensure equal competition between companies.

A spokesman for the European Commission said that businesses and member states of the EU were now much more prepared for a No Deal exit than when it last loomed in 2019, and ruled out that there could be any extension since the UK missed its last chance to ask for one in July.

“You either have a deal or you don’t have a deal,” the commission spokesman said. “At the end of the year the UK leaves the single market and the customs union there is no possibility to extend the transition period beyond that point. As you know well that date is set in stone, the 1st of January.”

The first week in November had been considered the last chance to reach a deal but is now long past, potentially posing a challenge for how the deal can be translated into different EU languages, scrutinised, and voted on both in Westminster and the European Parliament.

The European Parliament is now considering convening for an emergency session between Christmas and New Year on December 28th if needed to approve the deal on time, bringing ratification up to its limit.

“The anxiety and the stress is starting to build up in the European Parliament,” said Kati Piri, a Dutch MEP in the left-wing S&D bloc who is co-rapporteur on the future EU-UK partnership. “This is the shortest time we ever had to ratify a deal.”