Planet Business: Anyone for Zoom? 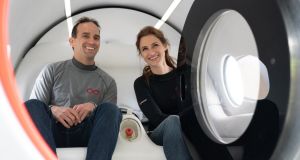 Image of the week: Hyperloop express

Taking a provisional silver medal for breakthrough of the week, Virgin Hyperloop spent its Sunday sending its first passengers on a trip down a 500m vacuum tube in the Nevada desert. The Hyper-what-now? The Hyperloop is Elon Musk’s vision of futuristic travel and a system he once described as “a cross between Concorde, a rail gun and an air hockey table”. But don’t let that put you off.

The open-source technology has attracted several other moneybags who are into this kind of thing, notably Richard Branson. After building Virgin Hyperloop’s DevLoop test site somewhere near Las Vegas, Branson found two brave guinea pigs – chief technology officer and co-founder Josh Giegel and director of passenger experience Sara Luchian – to have a go on the high-speed levitating pod system.

With the pod accelerating to 172km per hour inside the vacuum tube, the test took a swift 15 seconds to complete. No traffic, or anything. Afterwards, Luchian said the experience was “exhilarating both psychologically and physically”. So is travelling by Dublin Bus, to be fair.

In numbers: Zoom to breathe

17.4% Percentage decline in the share price of video calling platform on Monday, the day Pfizer said its Covid-19 vaccine appeared to be 90 per cent effective, signalling that an end might be in sight for Zoom tyranny.

300 million Number of daily meeting participants that Zoom has reached this year, up from a mere 10 million pre-pandemic. On Monday, the company also agreed to boost its security to settle claims it misled users about the level of encryption on its meetings.

Getting to know: Ugur Sahin and Özlem Türeci

Ugur Sahin was four when he and his mother moved from Turkey to Germany to join his father, who was working at a Ford factory in Cologne. Özlem Türeci, the child of Turkish immigrants to Germany, was born in Lower Saxony and spent her girlhood watching her father, a surgeon, on his hospital rounds. Both studied medicine and met each other at a teaching hospital in the southwestern city of Homberg. Medical research was their shared passion: Türeci once said that even on their wedding day, they both made time for lab work.

Alongside Christoph Huber, the husband-and-wife team spent years pursuing pioneering immune-based treatments for cancers, eventually exploring the use of Messenger RNA (mRNA), a modified genetic code that can be used to trick the body into fighting disease. When Sahin read about the coronavirus outbreak in Wuhan in January, he wondered if an mRNA-based viral vaccine might be the answer and their company BioNTech went to work on the task. A partnership with funders Pfizer and a highly promising, market-moving trial later, and Sahin and Türeci are now science’s most famous power couple.

With certain inevitability, McDonald’s is about to start trialling the McPlant burger (in partnership with Beyond Meat), aimed at the untapped vegan market, and it’s also hinting at the future arrival of meatless “chicken” and breakfast sandwiches. So will the McPlant range stand the test of time, or will it join these discontinued products in the great big McDonald’s in the McSky?

1. McSpaghetti. It can still be found in the Philippines apparently, but old Ronald McDonald’s cardboard-box take on pasta never quite took off elsewhere.

3. McSalad Shaker. Sad leaves in a Frappuccino cup for people who hate their lives. What could go wrong?

5. McLean Deluxe. This one was an actual burger, at least. The problem is you can be lean or you can be deluxe. You cannot be both.