Brexit parallels with the fall of Rome are all too obvious

Chris Johns: Just wait a few years and the UK will be clamouring to join the euro: Reality has a habit of intruding but it can take its time 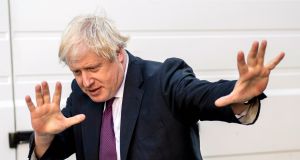 The Brexit debacle has been caused by many things, most notably a lack of awareness of history. And what we are witnessing is itself historic - but not without precedent. The parallels with the fall of Rome are all too obvious. We see, daily, a power struggle. One that pays no heed to the damage caused to the country that warring politicians are seeking to control.

Roman history provides plenty of examples of deliberate near destruction of the state as a device either to gain or consolidate power. Or simply to satisfy an appetite for destruction. The emperor Nero, with the probably apocryphal story about fiddling while Rome burned, comes most obviously to mind. He may or may not have provided musical accompaniment, but he almost certainly started the fire. Nero’s violin playing amidst chaos and destruction that he caused has contemporary resonance in Boris Johnson’s newspaper columns.

Brexit’s detachment from reality is complete. The current furore over the Withdrawal Agreement is a phoney war: the real battles await. Theresa May insists on calling the transition period an ‘Implementation Period’. Transition will see precisely nothing happen. Not a single thing will be implemented. The only notable event will be the start of negotiations about the UK’s future - post transition - trading relationship with the EU. And it can only be a start.

Without the rumoured extension, there are only 21 months for a trade deal to be done: nothing like this has ever been achieved before. Much simpler negotiations, historically, take far longer. The Canada deal, so admired by Johnson, took seven years. The Singapore Prime Minister popped over this week to sign his country’s trade deal with the EU - talks that began 8 1/2 years ago.

Traditional trade deals have objectives common to both sides: reduced tariffs and harmonised regulations. Brexit will dismantle existing tariff free trade and introduce new rules and regulations. These historically unique talks will take place with one side, the EU, not knowing what the other side wants. The UK shows no sign of making up its mind about its objectives. The UK causes great consternation in Brussels because it keeps asking the EU to solve the problem, without being able to come close to saying what the problem is.

Theresa May’s plan to add a year to the non-implementation period has, for the first time in living memory, resulted in a united Tory Party. Leavers and Remainers hate the idea. These are the same people that want to negotiate quick, fiendishly complicated trade deals with the rest of the world - who now tell us they didn’t read or understand last December’s deal over the Border backstop.

While the UK government plays the fiddle, a fire is slowly roasting the economy. Greg Ip in the Wall St Journal this week summarised what we know so far about the damage that Brexit has caused. Ip draws on data supplied by the global investment bank UBS who compare the British economy to a group of similarly performing other countries. Similarly performing until the 2016 referendum that is.

Britain and the control group track each other for the period 2005-16. Since then, the UK has underperformed by 2.1 per cent. That’s a load of lost personal income, spending and tax revenues. Those are real hospitals, schools and roads that have been denied funding. Lots of other studies, not least by the Bank of England, yield similar results.

The thing about counter factual history is that we don’t live it. Serious protest will arise only when Britain is tangibly - substantially - worse off than her neighbours. Just wait a few years and they will be clamouring to join the euro. Reality does have a habit of intruding but it can take its time.

For that future, the (UK’s) Institute for Government has just published a welcome forensic analysis of 15 different forecasts. They differ, as these things do, for all sorts of reasons. But the conclusion is clear: it’s going to be bad or very bad. There is a 16th forecast that is yet to see the light of day: the UK government’s own analysis. That’s due when/if the Withdrawal Agreement is successfully concluded.

Books are starting to be written about how, these days, feelings seem to matter more than facts. Objective reality, such as being poorer, means less than, say, sticking it to the elites. History suggests that it was ever thus. Those corrupt, venal and destructive Roman Emperors were always careful to appeal to the atavistic instincts of ‘the people’. Marcus Aurelius is revered today as a stoic philosopher but he also enjoyed the adoration of ordinary Romans for his repeated slaughter of Gauls and Germans.

Disasters were manufactured to smooth the path to power. Aurelius’s son, the Emperor Commodus, was, according to some accounts, nearly undone by a food shortage engineered by his chum, Cleander, who diverted grain supplies, planning to be a hero - and Emperor - after miraculously producing bread for hungry Romans. It didn’t work out and he was executed. The people, so carefully cultivated by populist Cleander, changed their minds and demanded his head (literally). The will of the people can be fickle, something that the new UK minister for post-Brexit food supplies - and other Brexiteers - might usefully ponder.

1 If tourists are such pariahs should we not be testing them on arrival?
2 ‘My rent here is so low it’s a joke’
3 Varadkar and Donohoe to meet banks to discuss mortgage breaks
4 Belgium helps Ireland to a Brexit boon
5 Varadkar to meet banks in row over interest on mortgage payment breaks
6 WeWork on track for profits in 2021, says chairman
7 Can we finally say farewell to the scourge of hot-desking?
8 Ashford Castle hotel resort sold for €20m
9 Ashford Castle reopening after $50m makeover by new owner
10 Pharmaceutical industry signals it won’t extend drugs agreement
Real news has value SUBSCRIBE