Government to spend €39m on resources to prepare for Brexit

Majority of the money – €36.7m – will be spent by the Department of the Taoiseach 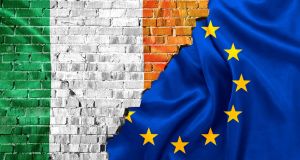 Irish Government departments will spend at least €39.3 million this year in an effort to better prepare for Brexit. Photograph: iStock

Dealing with Brexit will cost Irish Government departments at least €39.3 million this year, according to figures compiled by the Labour Party.

As part of the preparations associated with the United Kingdom’s decision to leave the European Union, the Government has set aside finances in order to hire and reallocate resources across a raft of departments.

The €39.3 million figure only represents additional expected spend from a limited number of departments. It’s difficult to establish the full cost of Brexit-related expenditure as a number of departments are simply reallocating resources within the confines of their existing budgets.

In response to parliamentary questions from Labour TD Joan Burton to every Government department, a number of Ministers confirmed their plans to spend more in an effort to better prepare for Brexit.

Of the 13 departments that responded to Ms Burton’s questions, nine said that new hires or reallocations associated with Brexit would come from their existing department budgets.

Minister for Finance Paschal Donohoe said: “Brexit resourcing has been managed within the existing pay bill allocation. My department will continue to monitor the resources needed to respond to specific policy challenges on an ongoing basis.”

Minister for Education Richard Bruton said Brexit would have a limited impact on his department, therefore “additional resource requirements are not envisaged for the negotiation phase”.

Of the €39.3 million figure given, the majority – €36.7 million – will be spent by the Department of An Taoiseach which has been taking the lead in co-ordinating the Government management of Brexit-related issues. The Department of Foreign Affairs expects to spend roughly an additional €2 million this year.

Three departments have yet to respond to the former Labour Party leader’s queries. They are the Department of Health; Social Protection; and Communications, Climate Action and Environment.

Speaking to The Irish Times, Ms Burton said that Ireland needed to up its recruitment campaign for Brexit-related staff to secure more expertise.

“Ultimately, when it comes to trade matters, there’s a huge amount of regulatory and legal issues and that’s a particular kind of expertise,” she said.

While the majority of those that responded to Ms Burton’s questions said that they will move resources within their department into specific Brexit roles, others said they have hired, and plan to hire, additional resources.

At a conservative estimate, Government departments are expected to sanction at least 47 new hires who will solely be focused on Brexit. Ms Burton said the number wasn’t enormous “given the enormity of the negotiations we face”.

“While there’s an improvement in terms of recruiting, I’m not convinced that we have the specialist negotiating staff that we need to have,” she said.

Ms Burton raised the possibility of keeping on experienced senior civil servants, who are currently in the process of retiring – either on part-time or ad hoc arrangements – to bolster Ireland’s negotiating team.

In Budget 2017, the then minister for finance Michael Noonan announced that the Taoiseach’s department, and Revenue would receive additional funding to “navigate the challenges of Brexit”. However, it is not clear how much Mr Noonan planned to allocate when the budget was announced.

1 How much state pension will I get next year?
2 Oxford Covid vaccine trials offer hope for elderly
3 Google tells workers to return to country where they are employed
4 Hurrah for the companies giving staff more time off
5 Tesco takes to the skies with home delivery by drone
6 Buy one Clinton, get another one for free
7 All you need to know in the Max Schrems-Facebook case
8 Sustainable investment: How your pension can help tackle climate change
9 Architect building on tradition of ‘being a service to society’
10 How is Ireland’s meat industry handling recent Covid-19 outbreaks?
Real news has value SUBSCRIBE